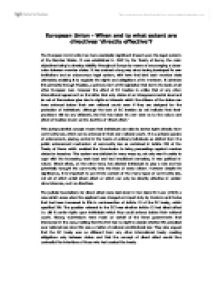 European Union - When and to what extent are directives 'directly effective'?

European Union - When and to what extent are directives 'directly effective'? The European Community has had a decidedly significant impact upon the legal systems of the Member States. It was established in 1957 by the Treaty of Rome, the main objectives being to develop stability throughout Europe by means of encouraging a closer union between member states. It has evolved a long way since having developed its own institutions and an autonomous legal system, with laws that bind each member state ultimately enabling it to regulate the rights and obligations of its members. It achieves this primarily through Treaties, a primary form of EC legislation that forms the basis of all other European Law. However the effect of EC treaties is unlike that of any other international agreement as the latter bind only states at an intergovernmental level and do not of themselves give rise to rights or interests which the citizens of the states can have enforced before their own national courts even if they are designed for the protection of individuals. Although the text of EC treaties do not indicate that their provisions will be any different, the ECJ has taken its own view as to the nature and effect of treaties known as the doctrine of 'direct effect.' This jurisprudential concept means that individuals are able to derive rights directly from community law, which can be enforced in their own national courts. It is a private species of enforcement, placing control in the hands of ordinary individuals as distinct from the public enforcement mechanism of community law as contained in Article 226 of the Treaty of Rome which enabled the Commission to bring proceedings against member states for breaches. This system was deficient in many ways as, not only was it unable to cope with the increasing work load and had insufficient remedies, it was political in nature. Direct effect, on the other hand, has allowed individuals to play a role and has potentially brought the community into the lives of every citizen. ...read more.

in which the applicant was subjected to criminal proceedings under domestic legislation for breaching Italian legislation that had been implemented to effect the provisions of a directive but which was more stringent on the matter of the packaging of solvents. Therefore Ratti relied on his defence on the direct effect of the community directive, which led to a preliminary reference being made to the ECJ. To justify the direct enforceability of directives, the court put forward what has become known as the 'estoppel' argument. The reasoning follows that the state commits a wrong by not implementing a directive by the appropriate time or not implementing it properly and thus the they are estopped from refusing to recognise its binding effect in cases where it is pleaded against them by individuals relying on rights under that directive. The case also confirmed the position that individuals could only rely upon rights directly under the directive "at the end of the prescribed period and in the event of a the member states default," at which point the member state forfeits any discretion they were given and the directive becomes directly effective. The direct effect of directives was not, however, afforded 'free reign' and the courts achieved some measure of constraint through the concepts of vertical and horizontal effect. Van Duyn and Ratti affirmed that directives only have vertical effect so that an individual who is adversely affected by the states failure to implement a directive properly or at all only has rights against the state and not against a non-state entity or other individuals as the directive imposes the obligation of implementation upon the state. Therefore a 'horizontal' limitation was placed upon the scope of the direct effect of directives. This principle was addressed in Marshall 'v' Southampton and South West Hampshire Health Authority (1986) in which the applicant who was employed by the Health authority, was required to retire at 62 when men doing the same work did not have to retire until 65. ...read more.

This has since been extended beyond failure to implement directives to cover any breach of community law by a member state. The method is highly desirable as it not only provides an incentive for member states to implement directives before the expiry of the time limit for implementation and discourages laxness, it also offers individuals financial relief. The doctrine of 'direct effect' has clearly had a significant impact on the legal systems of all member states, providing a means for individuals to enforce rights derived from community legislation in their own national courts and in this sense can be considered a liberating concept, if not an 'ideal.' However, the position, particularly with regards to directives, remains complex and even highly volatile, undermining to some extent the certainty and effectiveness of community legislation that the concept set out to achieve. It is this question of 'when and to what extent' directives are directly effective that the jurisprudence of the ECJ has persistently confused and failed to answer with any degree of certainty. Directives appear to be vertically directly effective with horizontal limitations but this is a position that has been undermined with the expansive definition of state and the concept of indirect effect which provide another means for directives to be given legal effect within member states without having to encounter the restrictive conditions of direct effect. However the exact scope of this also remains unclear so that ultimately there is a situation where individuals no longer are aware precisely what the law is, undermining the rule of law. However despite this, it is important to place the doctrine in context, as although it is certainly a significant feature of the EC, the ECJ does lack jurisdiction over some areas of community law and therefore cannot determine the legal effect and nature of certain provisions. Furthermore the political and legal environment in which the community operates is highly dynamic and it is likely that other means of legal enforcement may become as important. ...read more.