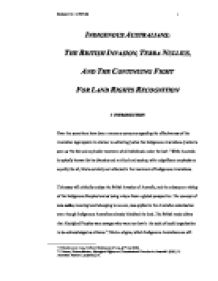 This recognition was introduced as legislation in 1993 as the Native Title Act.24 The 1996 decision of Wik Peoples v Queensland25 went on further and recognised native title rights on pastoral leases. This was a highly significant event as it created further opportunities for Indigenous Australians to claim land titles that cover up to 42% of Australia's land mass.26 At this time thousands of Aboriginal People were thought to finally gain some rights to their traditional lands with the co-existence of native title. However this was not the case. Amendments to the Native Title Act27 were passed in 1998, which limited the circumstances in which native title could be claimed. The enactment of the legislation, and the cases that followed slowly diminished the opportunities that had been laid out in the Mabo28 case. The immensity of the challenges that confront Indigenous Australians is clear, however, the increasing globalisation of the world has seen new opportunities arise. Innovation in policy planning in the area of multiculturalism and the law are generating interest.29 Australia as a nation state is growing in maturity in its legal system with the recognition by judges, Parliament and 'ordinary citizens' of the importance of international law in the area of human rights jurisprudence.30 IV INTERNATIONAL LAW AND ITS IMPACT IN AUSTRALIA For Indigenous Australians, a major defining moment in the recognition of their rights and the conflict between Aboriginal and white relations came to a positive turn when Australia became a signatory of the First Optional Protocol of the International Covenant on Civil and Political Rights on 25 December 1991. ...read more.