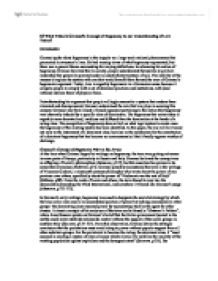 Of What Value is Gramsci's Concept of Hegemony to our Understanding of Law Today?

Of What Value is Gramsci's Concept of Hegemony to our Understanding of Law Today? Introduction Gramsci spoke about hegemony in the singular as a large-scale national phenomenon that permeated in everyone's lives. He had varying views of what hegemony represented, but there was a general theme surrounding his varying definitions. In advancing his notion of hegemony, Gramsci believed that in society, people subordinated themselves to political leadership that generally operated under an unsatisfactory system of rule. The inability of the masses to replace the system with one that would benefit them formed the crux of Gramsci's hegemonic argument. Today, Law is arguably hegemonic in a Gramscian sense because it compels people to comply with a set of dominant practices and institutions, with (and without) adverse threat of physical force. Notwithstanding his argument that people willingly consent to a system that renders them alienated and disempowered, Gramsci undermined the role that law plays in securing this consent. Gramsci may have raised a flawed argument pertaining to the notion that hegemony was inherently induced by a specific class of dominators. The hegemony that exists today is arguably more decentralized, insidious and diffused than the domination at the hands of a ruling class. The recognition of hegemony does not tell us what legal system to create once the hegemony of the existing system has been identified. In this paper, the law will be viewed not only as the instrument of a dominant class, but also as the mechanism for the constitution of a dominant hegemony that has become so commonsensical that it hardly appears worthy of challenge. Gramsci's Concept of Hegemony Prior to his Arrest At the time when Gramsci began his writings on hegemony, the term was gaining relevance in some parts of Europe, particularly in Russia and Italy. Gramsci believed the concept was an offspring of Lenin's philosophies (Adamson, p172), but this assertion has proven to be somewhat erroneous (Anderson, p15). ...read more.

Notwithstanding, Genovese pointed to the relative sanctity that existed as a function of the fact that slavery was incorporated into law. He argued that because of law, people tend suppress their conflicts. Initially, the slave was seen as a property, but as time went on, the law kept redefining the slave and its role in society, to best suit the hegemony within America (in 1828 in Kentucky, a court ruled that a slave by its code was not treated as a person but a thing; in 1829 in Kentucky, a slave did have volition and his feelings could not be completely disregarded; by 1836 in Kentucky, although they were property, slaves also had personal existence. The courts said slaves had will but were at their master's disposal. This meant a slave could be tried for murder but could not testify as a witness. Slave marriages were not recognized in law, and mixed race co-habitation was illegal. Until 1860s, slaves remained in political representation as 3/5th of a person). This hypocritical nature of coercive law at a nation-state level is not as prevalent today, but it could be argued that many laws that hide behind the veil of equality and liberalism illustrate subtle discriminating tendencies in order to maintain the hegemony of the ruling social and ethnic class. For example, it has widely been argued that the notion of affirmative action, where western institutions are somewhat mandated to admit a certain percentage of non-white minorities to its work/school force, smacks of the same twisted rationale behind the justification of the nature of a slave- the end result is that non-white minorities continue to be defined within the context of his/her ethnicity, rather than his/her qualification. In the institutions' overzealousness to appear racially diverse, they commit the same crimes of the American lawmakers in the 19th century. The critical aspect of negative law today is its ability to 'function' unnoticed. For example, government agencies in some countries grant television licenses to stations that run approved programming. ...read more.

Through its function as the arbitrator of social ontology, law induces large scale compliance. Law sets the tone and the discourse for what activities are approved and disapproved. However, Gramsci underestimated the role of law in relation to the phenomenon of hegemony and counter-hegemony. Law and rules of world order are imposed with self righteous rhetoric by the "spear carriers" on others, but time and time again, these 'liberators' have used and defined law to their advantage. Gramsci believed that the powerful dominated in a forceful state, and they imposed their will by using law as a tool. He suggests that the middle class, to preserve its power, has claimed to rule in the interest of all people. Even when force is used, it is done in the name of the majority. That claim to rule in the interest of the majority is part of the hegemonic and ideological control. The story of popular rule is shared through our institutions in a way similar to Hegel's ethical support for life. Notwithstanding, Gramsci also believes that law can also be used in an innovative way (more positive aspect). Here, he refers to the educated role of law. Gramsci argues that the state uses law to create and maintain a certain kind of society and citizen to foster certain attitudes, and most importantly to exclude certain possibilities. For example, property could be privately held, or collectively owned. Associations could be free, or not free. Slavery could be upheld or abolished. Even the requirements and rewards of citizenships are defined through law. Those who break these laws then see the punitive aspect of law. Essentially, law tends to have winners and losers. Gramsci argues that law is used to justify an existing set of regulations to make them seem normal, partly because law presents the state as the guardian of those who are ruled. When the arrangement of society contains inequality, the law upholds this inequality as well. The seeming naturalness of these arrangements makes people consent more to these arrangements. ...read more.