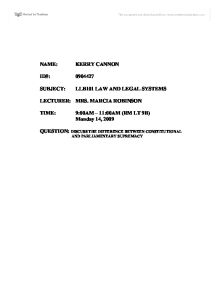 There is a fundamental difference between Constitutional supremacy and Parliamentary Supremacy.

NAME: KERRY CANNON ID#: 0904427 SUBJECT: LLB101 LAW AND LEGAL SYSTEMS LECTURER: MRS. MARCIA ROBINSON TIME: 9:00AM - 11:00AM (RM LT 9B) Monday 14, 2009 QUESTION: DISCUSS THE DIFFERENCE BETWEEN CONSTITUTIONAL AND PARLIAMENTARY SUPREMACY -1- There is a fundamental difference between Constitutional supremacy and Parliamentary Supremacy. Professor King in his Hamlyn lecture defined the constitution as the set of the most important rules that regulate the relations among the different parts of the government and the people of a country. A constitution he maintained is a written statement of a state or country's constitutional rules in a document or codified form. Parliamentary Supremacy according to the Wikipedia Free Encyclopedia means a legislative body has absolute sovereignty; it is supreme to all other government institutions (including any executive or judicial bodies as they may exist). It implies that the legislative body may change or repeal any prior legislative acts. ...read more.

If any other law conflict with the constitution, the Jamaican Supreme Court can strike them down such a law as unconstitutional. -4- Flexibility for constitutional supremacy does not enjoy the same ease for amendment as Parliamentary Supremacy since it is the supreme law within the nation or state it is more difficult to amend, special procedures has to be followed. The functions of the Constitution - It lays down obligatory procedures for the state, it states basic human rights, the granting of authority to make laws. In conclusion looking at Parliamentary and Constitutional Supremacy, written constitution is most valuable as they provide guidelines as what to do in practice. However, I appreciate the role of parliamentary Supremacy since the law is described as a 'living organism'; it changes with time and as such can accommodate changes. -5- SOURCES 1. COMMONWEALTH CARIBBEAN LAW AND LEGAL SYSTEMS 2ND Edition Rose-Marie Belle Antoine 2. CONSTITUTIONAL & ADMINISTRATIVE LAW 5th Edition Neil Parpworth 3. CONSTITUTIONAL & ADMINISTRATIVE LAW 14TH Edition AW Bradley & K D Ewing ...read more.