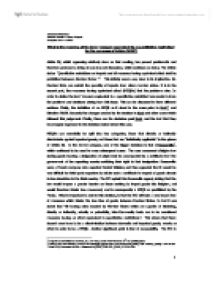 What is the meaning of the term 'measure equivalent to a quantitative restriction' for the purposes of Article 28 EC?

Samantha Nicholson Seminar Leader - Harm Schepel European Law - LW511 What is the meaning of the term 'measure equivalent to a quantitative restriction' for the purposes of Article 28 EC? Article 28, whilst appearing relatively clear on first reading, has proved problematic and therefore produced a string of case law and discussion, which continues on today. The Article states "Quantitative restrictions on imports and all measures having equivalent effect shall be prohibited between Member States.".1 This initially seems very clear in its implication. No Member State can restrict the quantity of imports from other member states. It is in the second part, the measures having equivalent effect (MEQR's) that the problems arise. In order to define the term 'measure equivalent to a quantitative restriction' one needs to trace the problems and decisions arising from this issue. This can be discussed in three different sections. Firstly, the definition of an MEQR as it stood in the cases prior to Keck2, and Directive 70/50. Secondly the changes created by the decision in Keck and other cases which followed this judgement. Finally, there are the decisions post Keck, and the fact that they have largely regressed to the decisions taken before this case. MEQR's can essentially be split into two categories; those that directly or indirectly discriminate against imported goods, and those that are "indistinctly applicable" to the sphere of Article 28. In the former category, one of the bigger decisions is that of Dassonville3, which continued to be used in many subsequent cases. The case concerned a Belgian law stating goods bearing a designation of origin must be accompanied by a certificate from the government of the exporting country certifying their right to that designation. ...read more.

It provides: "That the Directive also covers measures governing the marketing of products which deal, inter alia, with shape, size, weight, composition, presentation, and identification, where the measures are equally applicable to domestic and imported products, and where the restrictive effect of such measures on the free movement of goods exceeds the effect intrinsic to such rules." 8 In fact this could have been seen as early on as Dassonville, where the definition of a MEQR did not require an element of discrimination. This application of Article 28 was seen in the landmark case of Cassis de Dijon9 . In this case, the applicant intended to import the liqueur of "Cassis de Dijon" into Germany from France. German law required that there be a minimum alcohol content of 25% in such liqueurs, and the applicant argued that this amounted to an MEQR as it prevented the French version of the drink to be lawfully marketed in Germany. The Court, in its judgement, affirmed the application of Article 28 to indistinctly applicable rules, (therefore not needing discrimination only inhibition of trade because the national rules were different from the trade rules applicable in the county of origin) , and extending the Dassonville decision. It ruled that once goods had been marketed in one Member state they should be admitted into any other Member State without restriction, unless a good reason can be shown in relation to one of the mandatory defences10. This case therefore epitomised a principle of "mutual recognition"11, and has proven to be one of the most important cases regarding the attitude of the ECJ towards free movement of goods. ...read more.

Therefore even though cases before hand seemed to meander between principles over what would or would not constitute a MEQR, Keck greatly clarified this area, clearly defining what would or would not be caught by Article 28. However there was an unfavourable reaction to this decision, as it placed too much emphasis on legal and factual equality, whilst ignoring the more important point of market access. There has been therefore a move away from the decision in Keck, back to the area of Cassis de Dijon, thereby giving the ECJ greater powers to rule regarding market-access, in the hope of moving towards a single market. If Keck is an unsatisfactory conclusion, what other way can there be to define the scope of article 28 and what a MEQR actually is? It can be argued that although formalistic in its approach, Keck is a better way forward than the days that preceded it, with unclear decisions and inconsistent reasoning. It created no end of litigants eager to challenge any number of national trade rules, and in the further cases of the Cinetheque case and Torfaen led to a complete uncertainty of the law. Would it not be better to have a clearly defined approach to an area of law so contentious and perhaps important as the free-market, and the rights of individual Member States against the rights of the EC? Keck has given us a clear and concise definition of what a MEQR is, for which has been long striven for, and it would seem illogical to forsake this clarity for a desire to afford the ECJ more powers which could in the long run prove more ineffective. ...read more.

Long but largely accurate summary of the issues in this area of law. However, the writing style this student has adopted would be ineffective in an exam; a much tighter writing style is required.

The student would had gained more marks had he/she also made reference to academic commentary.