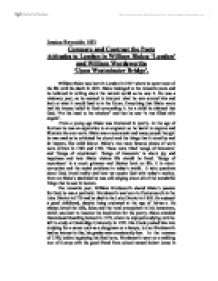 Attitudes to London in William Blakes 'London' and William Wordsworths 'Upon Westminster Bridge'.

Jessica Reynolds 10D Compare and Contrast the Poets Attitudes to London in William Blakes 'London' and William Wordsworths 'Upon Westminster Bridge'. William Blake was born in London in 1957 where he spent most of his life until his death in 1827. Blake belonged to the romantic poets and he believed in writing about the natural world as he saw it. He was a visionary poet, as he seemed to interpret what he saw around him and look at what it would lead to in the future. Everything that Blake wrote had his intense belief in God surrounding it. As a child he claimed that God, "Put his head to the window" and that he saw "a tree filled with angels". From a young age Blake was interested in poetry. At the age of fourteen he was an apprentice to an engraver so he learnt to engrave and illustrate his own work. Blake was a communist and many people thought he was mad as he criticised the church and the things that it stood by and let happen, like child labour. Blake's two most famous pieces of work were written in 1789 and 1794. These were titled 'songs of innocents' and 'Songs of experience'. 'Songs of innocents' is about joy and happiness and how Blake visions life should be lived. 'Songs of experience' is a much grimmer and bleaker look on life. It is about corruption and the social problems in today's world. It asks questions about God, brutal reality and how we equate God with today's society. ...read more.

It could also mean that the people of London have had enough of the Royal family not doing their job and the blood could be that shed in a revolution. The final verse starts with 'But most', this means that Blake wants the reader to pay most attention to this verse as it is most important. He says 'through midnight streets', so the streets are very dark, he hears 'youthful harlots curse'. This is another terrible form of child abuse and harlots are considered the lowest form in society. The poem says 'blasts the new born infants tear'. This is saying that the young prostitute has a child who she is swearing at as she hates it so much where as she should be loving it. Because she has a child, the girl will probably never have a happy family life which is why the baby 'blights with plagues the marriage hearse'. This is juxtaposition as marriage and deaths are not normally associated with each other, but in this case Blake is talking about the death of the harlots marriage. The two words are placed side by side for a more dramatic effect. This poem is about the people who live in London and the poverty that they suffer. The writer is trying to say that they are trapped in their minds so they can not escape their class in society. The people like soldiers, prostitutes and chimney sweeps don't realise that they can lead a better life but they are manacled in the life they are in and nobody is doing anything to help them. ...read more.

Therefore, his knowledge of the city would be greater and so more reliable than an outsider like Wordsworth. However Blakes poem may be bias, as if he has that much against the city, he will want to make the poem make London sound very bad so he may exaggerate. For example, 'every face I meet', surely not absolutely everyone would be full of 'weakness' and 'woe'. Wordsworth wrote his poem as the sun was rising, but any sunrise tends to be quite amazing so anywhere would look more beautiful at that time of day. The site would not be so fantastic if it was seen in the afternoon when the site was packed with people, noise and smoke. Blake looked at London from a dark point of view and the language shows this, 'cry', 'sigh', 'curse, this shows progression as a curse is worse than a sigh and a sigh is worse than a cry. The language in Wordsworth's poem shows that he looked at it from a much more open point of view, 'beautiful', 'bright', 'glittering', etc. Blake also makes the point that every street is owned so everyone is trapped, 'each chartered street'. Where as Wordsworth gives the feeling of freedom and liberation in saying, 'The river glideth of it's own sweet will'. We can now see that the two poems have completely different perspectives. Both poets have their own view of the city, one good, and one bad. I would not like to visit Blakes London but Wordsworth's view of the city seems very inviting and I too would like to witness that sunrise that he claims is the best in the world. ...read more.