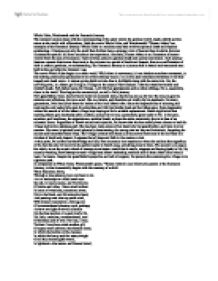 Both the movie Whale Rider, and Wordsworth's &quot;Tintern Abbey&quot; are examples of the Romantic Journey. Whale Rider is a timeless story that involves spiritual death and mystical awakenings. It features not only the proof

Whale Rider, Wordsworth and the Romantic Journey The romantic journey deals with the understanding of the static world, the spiritual world, death, rebirth and the return to the world with affirmations. Both the movie Whale Rider, and Wordsworth's "Tintern Abbey" are examples of the Romantic Journey. Whale Rider is a timeless story that involves spiritual death and mystical awakenings. It features not only the proof that children have a stronger view of heaven than do adults, but also illustrates the painful fall from innocence into experience. Similarly, Tintern Abbey is an illustration of nature viewed from the eyes of innocence. Each revolves around a spiritual death and secular conversion. Each journey features a person that moves from trust in the universe to a period of doubt and despair, then to a reaffirmation of faith in cosmic goodness, or understanding. The Romantic Journey is a journey that is eternal and transcends eras both before and after the Romantic Age. The movie Whale Rider begins in a static world. While there is movement, it is an absolute mundane movement, in that nothing cosmically spectacular or out of the ordinary occurs. It is in this stale mundane movement of life that tragedy and death occur. A woman giving birth to twins dies in childbirth along with the male twin. Pai, the surviving twin, is a Maori girl living in a village on the coast of New Zealand. ...read more.

In comparison to Whale Rider, Wordsworth's poem, "Tintern Abbey", also follows the pattern of the Romantic Journey, in that it essentially begins with the memory of a child. These beauteous forms, Through a long absence, have not been to me As is a landscape to a blind man's eye: But oft, in lonely rooms, and 'mid the din Of towns and cities, I have owed to them In hours of weariness, sensations sweet, Felt in the blood, and felt along the heart; And passing even into my purer mind, With tranquil restoration:--feelings too Of unremembered pleasure: such, perhaps, As have no slight or trivial influence On that best portion of a good man's life, His little, nameless, unremembered, acts Of kindness and of love. Nor less, I trust, To them I may have owed another gift, Of aspect more sublime; that blessed mood, In which the burthen of the mystery, In which the heavy and the weary weight Of all this unintelligible world, Is lightened:--that serene and blessed mood, In which the affections gently lead us on,-- Until, the breath of this corporeal frame And even the motion of our human blood Almost suspended, we are laid asleep In body, and become a living soul: While with an eye made quiet by the power Of harmony, and the deep power of joy, We see into the life of things. ...read more.

Not for this Faint I, nor mourn nor murmur, other gifts Have followed; for such loss, I would believe, Abundant recompence. For I have learned To look on nature, not as in the hour Of thoughtless youth; but hearing oftentimes The still, sad music of humanity, Nor harsh nor grating, though of ample power To chasten and subdue. And I have felt A presence that disturbs me with the joy Of elevated thoughts; a sense sublime Of something far more deeply interfused, Whose dwelling is the light of setting suns, And the round ocean and the living air, And the blue sky, and in the mind of man; A motion and a spirit, that impels All thinking things, all objects of all thought, And rolls through all things. (65-102) Through the power of imagination, Wordsworth is able to connect to the power within the universe, and is able to see into the life of things, this transcendent mode is the power of transforming the imagination. After the spiritual rebirth Wordsworth returns to the world and brings with him the affirmation of the meaning in life. This movement is the action of the poem and of the romantic journey. Tintern Abbey and Whale Rider both illustrate not only the stages of spiritual death and rebirth, but by revealing the power of innocence, they demonstrate the return to the world with reaffirmations. The romantic impulse transcends any particular period and may be applied to times both before and after the Romantic Era ...read more.