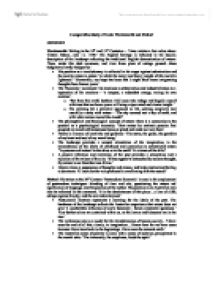 Comparative Study of Texts: Wordsworth and Malouf CONTEXT Wordsworth: Writing in the 18th and 19th Centuries - 'Lines written a few miles above Tintern Abbey...July 13, 1798.' His English heritage is reflected in his bucolic description of the landscape reflecting the traditional English domestication of nature: 'Here, under this dark sycamore, and view these plots of cottage ground...these hedgerows, hardly hedgerows.' * His position as a revolutionary is reflected in his anger against urbanization and the need to return to nature 'in which the weary and heavy weight of this world is lightened.' 'Meanwhile, my hope has been that I might fetch more invigorating thoughts from former years.' * The 'Romantic' movement: his reactions to urbanization and industrialization as a repression of his emotions - 'a tempest, a redundant energy, vexing its own creation'. o 'But from this awful burthen I full soon take refuge and beguile myself with trust that mellower years will bring a riper mind and clearer insight.' o His yearning for a primitive approach to life, seeking simplicity and crucially a unity with nature - 'The sky seemed not a sky of earth, and with what motion moved the clouds?' * The philosophical and theological concept of nature: there is a connection to the pastoral as a psychological necessity. 'How nature by extrinsic passion first peopled my mind with beauteous forms or grand and made me love them' * Nature is a source of creativity and guidance: 'The nurse, the guide, the guardian of my heart and soul of my moral being.' ...read more.

o "Those first-born affinities that fit our new existence to existing thoughts." o "Meanwhile my hope has been that I might fetch more invigorating thoughts from former years." * Poetry and language is at its purest when inspired by nature. In 'The prelude' he feels that he cannot write about 'topics worthy' while he is in the city. Nature is the inspirer 'of visionary things, and lively forms.' * WW's poetry was a 'natural delineation of human passions, human characters, and human incidents using the language of conversation...a spontaneous overflow of emotion.' * While some poems are regulated with a musical metre, they are almost always conversational and casually discoursive. 'Strange fits of passion I have known and will dare to tell but in the lover's ear alone what once to me befell.' * Nature as a bountiful, pastoral landscape, the human presence blends harmoniously, giving a sense of control. * Insight is gained through experience and interaction with nature - a greater understanding of the power of nature and its link to creativity and imagination. "No sweeter voice was ever heard in springtime from the cuckoobird." * The role of the child: an idealistic state of being, untarnished by conscience and experience. Memories of childhood evoked and WW's own (illegitimate) child looked to for inspiration. "My former pleasures in the shooting lights of thy wild eyes." o "God being with thee when we know it not." o "Many a time have I, a five years child, a naked boy...made one long bathing of a summer's day." ...read more.

He is allowing it to speak out of him." o "I try to precipitate myself into his consciousness of the world, his consciousness of me, but fail." o "He is walking on the water's light. And as I watch, he takes the first step off it, moving slowly away into the deepest distance, above the earth, above the water, on air." * Ovid is preoccupied with transcendence and the ability to experience states of consciousness beyond ourselves possible through imagination. The experience of nature allows an acceptance of death as a final transformation: "I am there." o "The notion of a destination no longer seems necessary to me. It has been swallowed up in the immensity of this landscape, as the days have been swallowed up by the sense of a life that stretches beyond the limits of measurable time." o "No more dreams. We have passed beyond them into the final reality." TECHNIQUES Broad summary of techniques - go through quotes and assign the techniques to them WW: - Simile, metaphor - Religious allusion - Repetition - Intensity of emotion - high modality and use of imperatives - Recollection of the past - Conventional 18th century poetic forms (iambic pentameter, sonnet) - Sound devices, alliteration, assonance, enjambment - "the language of conversation." Malouf - Motifs: water, dreams, the child, seeds, animals, metamorphosis, balance - The extended metaphor of language and its assigned power - Metaphysical imagery - Repetition - Rhetorical questions - Shifting discourses of narration (blending time, tenses, use of ellipses) - Stream of consciousness, fluidity and lucidity - Flashbacks and dream sequences - Episodic plot - Variable sentence lengths - Juxtaposition. ...read more.