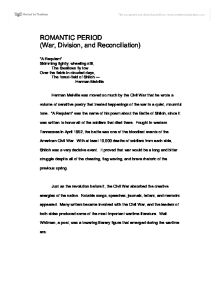 Herman Melville was moved so much by the Civil War that he wrote a volume of sensitive poetry.

ROMANTIC PERIOD (War, Division, and Reconciliation) "A Requiem" Skimming lightly, wheeling still, The Swallows fly low Over the fields in clouded days, The forest-field of Shiloh - Herman Melville Herman Melville was moved so much by the Civil War that he wrote a volume of sensitive poetry that treated happenings of the war in a quiet, mournful tone. "A Requiem" was the name of his poem about the Battle of Shiloh, since it was written to honor all of the soldiers that died there. Fought in western Tennessee in April 1862, the battle was one of the bloodiest events of the American Civil War. With at least 10,000 deaths of soldiers from each side, Shiloh was a very decisive event. It proved that war would be a long and bitter struggle despite all of the cheering, flag waving, and brave rhetoric of the previous spring. ...read more.

There were few things that could be done to end the controversy. The South could secede from the Union, which they often threatened, or freedom of slaves, which many in the North demanded. In the 1850's, the North and South entered on a collision course. There was a big question that had been raised. "Would the new territories in the West enter the Union as free states or as slave states?" Walt Whitman saw this conflict as on between "the passions and paradoxes" rather than a "struggle between two distinct and separate peoples" within the United States. It was clear that the North and South had developed on different lines. In the North, the phrase was "commerce is king" rather than the South's motto "cotton is king." The Industrial Revolution and low priced transportation had helped turn the towns and cities of the North into centers of bustling activity. ...read more.

Statesmen might make tactical compromises on such matters as free states or slave states being carved from the new territories, but there could be no compromise on slavery's legality. The northerners on the other side of the issue were just as adamant. William Lloyd Garrison published The Liberator, which was an abolitionist weekly. It demanded the immediate, uncompensated freedom for all slaves. His first issue proclaimed: "I am in earnest-I will not equivocate-I will not excuse-I will not retreat a single inch-and I will be heard." There were few people in the antislavery movement that were as extreme as Garrison. Their basic goal was unacceptable to most southerners. In 1860, the controversy between the North and the South came to a head. That was the year that Abraham Lincoln was elected President of the United States in a bitter four-way race. Lincoln was once quoted as saying, "If slavery is not wrong, nothing is wrong." The nation "paradoxes and passions" that Whitman observed could no longer be contained by compromise. ...read more.