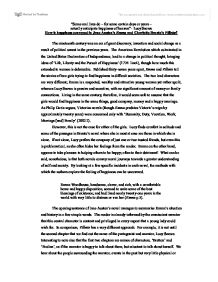 How is happiness conveyed in Jane Austen's Emma and Charlotte Bronte's Villette?

"Some real lives do - for some certain days or years - actually anticipate happiness of heaven" - Lucy Snowe How is happiness conveyed in Jane Austen's Emma and Charlotte Bronte's Villette? The nineteenth century was an era of great discovery, invention and social change as a result of political unrest in the previous years. The American Revolution which culminated in the United States Declaration of Independence, lead to a change in political thought, bringing ideas of 'Life, Liberty and the Pursuit of Happiness' (1776: line4), though how much this extended to women is debateable. Published thirty-seven years apart, Emma and Villette tell the stories of two girls trying to find happiness in difficult societies. The two lead characters are very different; Emma is a respected, wealthy and attractive young woman yet rather spoilt, whereas Lucy Snowe is passive and secretive, with no significant amount of money or family connections. Living in the same century, therefore, it would seem safe to assume that the girls would find happiness in the same things; good company, money and a happy marriage. As Philip Davis argues, Victorian novels (though Emma predates Victoria's reign by approximately twenty years) were concerned only with 'Humanity, Duty, Vocation, Work, Marriage [and] Family' (2002:2). However, this is not the case for either of the girls. Lucy finds comfort in solitude and some of the passages in Bronte's novel where she is most at ease are those in which she is alone. If not alone, Lucy prefers the company of just one or two trusted friends, but even this is problematical, as she often hides her feelings from the reader. ...read more.

Because she demands a kind of variety and excitement life cannot supply, Emma allows her fancy and imagination to shape and distort her perception of reality [....] What Emma constantly desires and frequently demands is not simply that her world admire her; it must also be as rich and vital and beautiful as she feels herself potentially to be [....] The crux of the matter, then, is the peculiar way in which Emma's life depends upon and is dedicated to richness and beauty in human experience. (Minter 1966 : 51) Minter argues that Emma relies on this constant application of herself to try and adapt her surroundings to suit her. In doing this, Emma is attempting to create an environment in which she is truly comfortable; not a trait one would associate with a young lady of 'happy disposition' (Emma p.1), but more with slightly nervous and compulsive behaviour. It is as if Emma must have control of the events around her to feel content. This shows a certain extent of self-consciousness and dissatisfaction, reflected most clearly in her thoughts of Jane Fairfax: Why she did not like Jane Fairfax might be a difficult question to answer; Mr Knightly had once told her it was because she saw in her the really accomplished young woman, which she wanted to be thought herself. (Emma p.125) 'View in this manner, Emma becomes, in essence, a structured action in which Jane Austen renders both the nobility and the dangers, the significance and the consequences of Emma's endeavour to force an aesthetic ideal upon her world' (Minter 1966 : 51). ...read more.

It could be argued that Lucy Snowe finds an inner peace with herself, after enjoying three happy years, despite not having M. Paul with her. Perhaps knowing she is loved is enough, and so with this and the solitary life which has given her comfort throughout the novel, Lucy can be settled. With her flourishing school as financial security, Lucy does not require anything more; she has stability and security, that which she has lacked from a young age. Though the storm imagery, if consistent with the rest of Bronte's novel, indicates further change, we are not given any clues as to how this will transpire. With so many novels of this era, both Emma and Villette look at the difficulty of a woman finding true happiness in such a patriarchal society. Kate Millett argued that Villette was 'too subversive to be popular' (1977:140), accurate considering the conformity of many novels of the time. Emma, for example, still allows a happy ending and a marriage, despite the main character's actions throughout. In creating this alternative style, Charlotte Bronte shows happiness through a perhaps more realistic perspective, rather than Austen's romanticised, 'happily-ever-after' story. Austen, J., 1994 (1816). Emma. Croydon : Penguin Popular Classics Bronte, C., 1988 (1853). Villette. London : Everyman's Library Davis, P., 2002. The Oxford English Literary History, Volume 8 : 1830-1880. The Victorians. New York : Oxford University Press Kulcich, J., 1985. 'Passionate Reserve and Reserved Passion' in ELH (52,4) pp. 913-937 Millett, K., 1977. Sexual Politics. London : Virago Press Minter, D.L., 1966. 'Aesthetic Vision and the World of Emma' in Nineteeth-Century Fiction (21,1) pp.49-59 U.S National Archives and Records Administration, 2001. 'Declaration of Independence' [Online]. Accessed 13/01/2008. Available: http://www.archives.gov/national-archives-experience/charters/declaration_transcript.html 1 Source unknown ...read more.