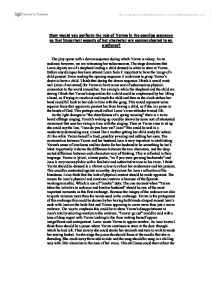 How would you perform the role of Yerma in the opening sequence so that important aspects of her character are communicated to an audience?

How would you perform the role of Yerma in the opening sequence so that important aspects of her character are communicated to an audience? The play opens with a dream sequence during which Yerma is asleep. As an audience however, we are witnessing her subconscious. The stage directions that Lorca depicts are of a shepherd leading a child dressed in white to stare at Yerma. Before any dialogue has been uttered Lorca feels it important to have the image of a child present. From reading the opening sequence it is obvious to grasp Yerma's desire to have a child. I think that during the dream sequence I think it would work well (even if not stated) for Yerma to have some sort of subconscious physical connection to the world around her. For example while the shepherd and the child are staring I think that Yerma's desperation for a child could be emphasised by her lifting a hand, as if trying to reach out and touch the child and then as the clock strikes her hand could fall back to her side in time with the gong. This would represent some superior force that appears to prevent her from having a child, as if she is a pawn in the hands of God. This perhaps could reflect Lorca's own attitudes toward life. As the light changes to "the cheerfulness of a spring morning" there is a voice heard offstage singing. ...read more.

Then slowly she could stroke her stomach and turn to walk towards her sewing basket. As she sings the poem she should focus at the needle that she is threading. She could sway from side to side and the song should be sung in a chilling way with little alteration to the tone of her voice. This chilliness could then reflect the cold imagery that Lorca has Yerma sing, "ice at the mountains crest." The pace of the song could quicken when Yerma sings the lines, "let the trees lift their branches up to the sun" but not too much that the pace detracts from the mood of the song. During the close of this song when Yerma says, "when, my child, are you going to come?" I think should be said in a desperate way that echoes into the pause Lorca asks for. The second exchange between Yerma and Maria is a much more intimate affair I think Lorca was more in tune with the women's way of thinking as he wasn't part of the macho male society. When Maria enters the scene and we find out that she is pregnant, I think it is important for Yerma's response to be as evident as possible to the audience. Lorca describes her he says she, "gazes at Maria in admiration". This is not the usual response we would come to expect from somebody who so evidently wants a baby, Yerma should be openly and genuinely happy for Maria with no sign of jealousy. ...read more.

It should be performed with a lot of passion and energy. The actor should appear as though what she is saying she considers being extremely true. This reflects the attitudes of Yerma towards childbirth and mothering. She is prepared to suffer a great deal to mother a child. She considers the pain "a good pain". The third exchange between Victor and Yerma is very significant in highlighting the difference between Yerma and her husband Juan. It is a much quicker paced scene with few lines being more than one line long. Victor appears to be everything that Juan isn't. Yerma should react vigorously to Victor's misinterpretation about the diapers. He assumes that Yerma is cutting them for her own child. Yerma's voice should become shaken and soft as if trying to resist the onset of tears. In response to Victor saying, "I'm happy for you" Yerma should be physically moved as if trying to speak but unable to find the words to utter. When Victor says, "this house needs a child" Yerma's reply should be strong and wilful in agreement with Victor. Victors words should trigger some sort of passionate response from Yerma as if he has read her mind. After his exit Yerma's song should be passionate and loving. When she rises to the spot where Victor stood her breath should be inhaled deeply and slowly as if trying to get a sense of him. I think she should smile when she inhales. But not so that she gives the impression that she lusts for Victor. ...read more.