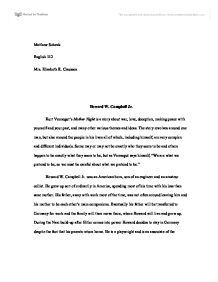 Kurt Vonnegut’s Mother Night is a story about war, love, deception, making peace with yourself and your past, and many other various themes and ideas. The story revolves around one man, but also around the people in his lives all of which, including himself, are very complex and different individuals. Some may or may not be exactly who they seem to be and others happen to be exactly what they seem to be, but as Vonnegut says himself, “We are what we pretend to be, so we must be careful about what we pretend to be.”

Howard W. Campbell Jr. was an American born, son of an engineer and an amateur cellist. He grew up sort of ordinarily in America, spending most of his time with his less than sane mother. His father, away with work most of the time, was not often around leaving him and his mother to be each other’s main companions. Eventually his father will be transferred to Germany for work and the family will then move there, where Howard will live and grow up. During the Nazi build-up after Hitler comes into power Howard decides to stay in Germany despite the fact that his parents return home. He is a playwright and is an associate of the members of the Nazi party and becomes a Nazi himself, though only in name and to be able to live and work comfortably in the Nazi ruled Germany.

After being approached by Major Wirtanen of the U.S. about being a spy for the Allied forces he reluctantly agrees. I feel that though he was hesitant at first that from the beginning who knew that it was the right thing to do and knew that the Nazis were about to be doing terrible things. From an American’s stand point, one that is of the arts as is Campbell he must have sympathy towards the Jews and what is going on and going to happen to them. Campbell works his way through the Nazi propaganda system eventually becoming the voice of anti-Jew broadcasting. Through this he sends coded messages to Allied forces completely disguised as propaganda for the Nazis.

Once his wife is presumed dead, after she went to entertain German troops, and Campbell visits his in-laws one last time I feel this is when he begins to feel guilt for his words. His father in-law tells him that if he was a spy he never could of served the other side better than he did Nazi Germany with his speeches. To think that you were doing good against an evil force only to be told by one of them that if you were helping the other side you’ve already helped us more is something I feel would bring a person down very hard on themselves. Also, after her death he claims to be a death worshipper, not only does his guilt begin to creep up on him but the love of his life is dead in war in which he is on both sides.

After being captured by U.S. forces Howard is set free, with the help of the influence of his “blue fairy godmother” Wirtanen, and given passage to New York. He secludes himself once there only socializing with a similarly lonely man named George Kraft. Kraft ultimately tries to trick Campbell into fleeing to Russia by making his presence known, only to cause interest in Campbell by a white supremacy group. The idolizes Campbell and for once I think he is enjoying the fact that people know him for what he was saying, even though it was a façade. It seems like his guilt and pleasure mix, while he has been living in this guilt for so many years about what he had done he also feels good about the recognition. He probably feels this way because it had been so long since he had felt admired or needed since the war, living in isolation can probably do that to a person, make them want to just be held in high regard for whatever the reason.

Along with all this the leader of the group brings a woman claiming to be Helga, alive. Campbell has not been so happy in a long time. Eventually she will reveal herself to be Resi, Helga’s younger sister. Though after revealing this Campbell seems to barely even mind, maybe he loved them both. Possibly Campbell was so in love and borderline obsessed with Helga, the Helga he knew from years before, that her sister resemble and felt like her enough that it no longer even mattered to Campbell.

Wirtanen warns Campbell about Kraft and his plot to get him to Russia and also informs him of Resi’s involvement in this. This definitely breaks Campbell’s heart, just after it had been somewhat restored with a sense of love and feeling. He confronts the two to be told that Resi’s feelings are genuine right before she commits suicide with a cyanide capsule, whether he believes her or not is up for interpretation. Perhaps his mind and logic is telling him not to yet he can’t help but want to after all he has been through. The question is after that can his heart speak louder than his mind and shut out the thoughts of her deception so that he only thinks of he love?

Campbell is taken into custody by the F.B.I. and once again set free thanks to Wirtanen. He returns home only to think to himself that he has nothing left to even live for here. In his apartment, being ashamed of what he has done and having just lost yet another “love”. He leaves and decides to turn himself into the Israelis and stands trial for his war crimes. Now we are back in the Israeli jail where Campbell awaits further trial. He receives a letter from Wirtanen saying that he found evidence of his being a spy and will testify for him. Most people would be happy to hear this though our Campbell is not. I suppose his guilt is still too much and he is nauseated by this. He is so damaged by his life that he claims he can not enjoy anything life has to offer, and decides that he will hang Howard W. Campbell, not for war crimes but for crimes against himself.

The guilt, the loss of Helga, the regaining of a person that resembles and is so much similar to his love, his obsession; all of these factors are playing into who Campbell is at this point. Is he at the brink of madness or just so distraught and depressed he no longer feels much? Once Resi has said she loved him and he watched her die is a point when Campbell is just no longer available, emotionally, to get back his own life. But the crimes against Campbell I feel were not all committed by him, a lot of these situations were put onto him by others.

The guilt and depression leading to his death was a combination of  his own actions and the misfortunes that his life had dealt him. I feel as though eventually Campbell could of gotten over the things he had said and the propaganda he spread during the war, it was just an act for covering up a greater could. It is all the things that happened afterwards that put him into this downward spiral and depression, though after Helga’s father’s comments I’m sure he felt tremendous guilt about what he had done. This comes back to one of the main themes of the book and quote: “We are what we pretend to be, so we must be careful about what we pretend to be.”