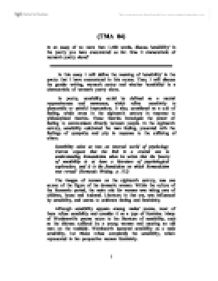 In this sense, we will represent Felicia Hemans: &quot;The Grave of a Poetess&quot;. Sensibility is appear obviously in this poem which succeed in transferring the human suffer among its verses

polemic arguing for naturalness in poetic language two years before Wordsworth wrote his 'Preface" to the second edition of Lyrical Ballads, in which he makes the same plea. Women Poets such as Baillie and other preceded Wordsworth and brought the vigour of common life and language to their writings. Many of the most popular poets, such as Letitia Elizabeth Landon (L.E.L), published their poems in annuals and ornamental giftbooks, which were directed towards a largely female readership. L.E.L. edited and wrote most of Health's Book of Beauty, and contributed to countless other. They promoted, particularly through their illustrations, an ideology of feminine beauty, providing models for women to emulate and confirming that the ideal woman was the object, not the subject, of the gaze. In this sense, we will represent Felicia Hemans: "The Grave of a Poetess". Sensibility is appear obviously in this poem which succeed in transferring the human suffer among its verses. In such a poem which written by woman, the death seems strangely bound up with expression, and it show how might this bundling affect the poem's agenda. In the final stanza of The Grave of a Poetess, Felicia Hemans completes the turn of her poem from one of melancholy lament at ...read more.

On the other hand women sensibility interest in domestic matters and social and family sadness and women suffering. Further more they interest in the story of love and families and they use gothic elements in their poetry. In conclusion, we defined sensibility as a matter of sensitivity and expression of emotions which arose in eighteenth century poetry. Both of men and women used sensibility in their poetry, but each of them employ it in a different way. The work of Wordsworth and Coleridge, Keats Byron and Shelley borrows significantly from female authors and 'feminine' types of literature, such as sensibility, even though it seeks to mark its own works as masculine and to sever the association with female writers and readers. Sensibility arose in men's poetry as a matter of expressing the refusal to the political situation and the social suffering. Whereas, it arose in women sensibility among their awareness of domestic needs and women suffering. In men's perspective the woman is a poem not a poet, and that was what we notice in Wordsworth poem "Lucy" as he used Lucy as a passive character, he interest in describing her beauty, but there were no considered to her intelligence. ...read more.