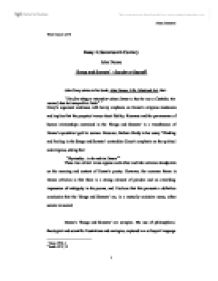 Word Count: 2,574 Essay 2: Seventeenth Century John Donne 'Songs and Sonnets' - Secular or Sacred? John Carey states in his book, John Donne: Life, Mind and Art, that: "The first thing to remember about Donne is that he was a Catholic; the second, that he betrayed his Faith". 1 Carey's argument continues with heavy emphasis on Donne's religious tendencies and implies that the perpetual worry about fidelity, falseness and the permanence of human relationships contained in the 'Songs and Sonnets' is a transference of Donne's apostatical guilt to women. However, Barbara Hardy in her essay 'Thinking and Feeling in the Songs and Sonnets' contradicts Carey's emphasis on the spiritual and religious, stating that: "Physicality...is the rule in Donne"2 These two critical views oppose each other and take extreme standpoints on the meaning and content of Donne's poetry. However, the common theme in Donne criticism is that there is a strong element of paradox and an overriding impression of ambiguity in his poems, and I believe that this prevents a definitive conclusion that the 'Songs and Sonnets' are, in a mutually exclusive sense, either secular or sacred. Donne's 'Songs and Sonnets' are complex. His use of philosophical, theological and scientific illustrations and analogies, captured in a colloquial language "such as men do use"3 make it extremely difficult to tease out the hidden depths of the poems, and can confuse the issue of whether they are secular or scared in nature. ...read more.

They challenge the sun to search for anything which can compare to, in the context of their self-contained world, the "rich experience"11 of human love and spirit, and the "preciousness of the human soul besides which all else pales into insignificance"12. In this way, their love is everything, it can transcend to become supreme and heavenly - a sacred love. 'The Canonization' is another example of Donne proclaiming that he and his lover are completely self-contained and have no need of anyone or anything else, only in this poem, he states this by protesting that they have no effect on the outside world: "Alas, alas, who's injur'd by my love?... ...Call us what you will, wee are made such by love"13 (lns 10 & 19) The conflict in this poem is much more prominent than in 'The Sunne Rising', which leans more towards earthly love as he is "boldly conflating the secular and the sacred"14 - the "boldly" probably referring to the opening exclamation, and the colloquial language he uses throughout: "For Godsake hold your tongue, and let me love,"15 (ln 1) This dialectal tone contributes to the appearance of the poem as being of a secular nature, and Donne's frequent reference to the sexual act and employment of sexual connotations and imagery certainly provide evidence for it having the aforementioned "physicality" as a rule. In the second stanza, he refers to himself and his lover as flies, a common example of unbridled sexuality, and continues this theme with a metaphor of them as tapers, which, whilst conjuring images of self-consumation, have phallic connotations. ...read more.