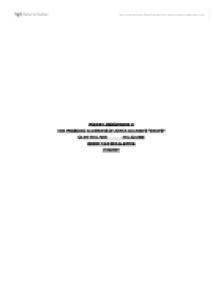 POETRY ASSIGNMENT II THE PROSODIC ELEMENTS OF JOYCE KILMER'S "TREE'S" GLEN MILLNER MLLGLE006 SIMON VAN SCHALKWYK 07/06/2007 Poetry Assignment II - "Tree's" by Joyce Kilmer 07/06/2007 Tutor: Simon van Schalkwyk Glen Millner MLLGLE006 Joyce Kilmer, born (1886 -1918) in Mahwah New Jersey, was a poet whose admiration for the earth's natural environment and all it encompassed was fragmented in the form of the poem "Tree's". A simple poem whose structure consists of six short verses, reflecting a steady poetic flow with accordance to the rule (A/A, B/B, ...) etc. This flow, known as the cadence, is the rhythmic meter of the poem and is sung like music from a song. More, the run on lines or enjambment provide evidence that further substantiates the poem's rhythm. The poem begins thus with the omniscient "I", that is the speaker in the dialogue, describing an image of a tree held in a fragment of his memory. His affection for this tree takes on different forms of understanding as his ideas are expanded in the verses of the poem. ...read more.

The derivative of these prosodic elements signify the tone form the totality of the linguistic experience that is represented by the position of the vowels. "Sweet" has a syllabic design that enacts a smooth sensation with the tongue. The vowels differ slightly in tone, the first "e" begins in the "middle" and quickly ascends to a "high". Within This monosyllable forms part of a linguistic structure, know as the Holonym. This is a particular linguistic form where a part forms a constituent of a whole. "Sweet" forms part of the sensory operation taste, which is a psychological function; this existential theoretical state where a complex idea is stemmed from a simple one is linked to the processes of syntax. Saussure's: Nature of the Linguistic Sign, is linked to the signification and the signal of the sign. He states, "the sign is the combination of signification and signal that together forms part of a whole." This relationship between the signification and the signal is arbitrary but the mode of behavior that expresses the particular collective habit, endows the meaning of the sign with an "ideal semiological process". ...read more.

The intonation therefore models the mode of the utterance and reflects the choice of words used by the poet to represent his idea. So, it is the utterance that completes the meaning of the sentence and the overall meaning of the poem as a whole. I think that in order to bridge some of the gaps in meaning that are prevalent in some of the conceptions used, further exploration of the linguistic structure is necessary. I would have liked to have used Bakhtin's theory on the Construction Of the Utterance more to further explain the arrangement of words around the concept "tree". This would have clearly modified the verse of the poem and would justify precise and coherent thinking. To delve further into the core of the issue, would require expansion of the prosodic elements in the poem such as the ideas of discourse and pragmatics that would form an intimate understanding of the poet's thinking and the message that he wishes to convey. The pleasant rhythm the poem sustains in its simplest form parts a goodness of heat and mind that speaks truly about Kilmer's relationship with nature and unites the idea of tree. ...read more.