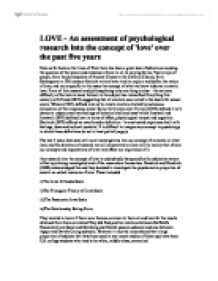 LOVE - An assessment of psychological research into the concept of 'love' over the past five years Even as far back as the times of Plato there has been a great deal of debate surrounding the question of the nature and existence of love in all its varying forms. Vast arrays of people, from the philosophers of Ancient Greece to the Catholic Church, from Shakespeare to 20th century feminist writers have tried to explore and define the nature of love; and more specific to this essay the concept of what we know today as romantic love. From all this research and philosophising only one thing is clear - the extreme difficulty of the task in hand. Interest in the subject has intensified if anything this century with Freud (1922) suggesting that all emotion was rooted in the desire for sexual union. Watson (1924) defined love as 'an innate emotion elicited by cutaneous stimulation of the erogenous zones.' Some thirty years later Fromm (1956) defined it as 'a device to reduce ones own feelings of isolation and loneliness' whilst Lasswell and Lasswell (1976) defined love in terms of affect, physiological arousal and cognition. Skolnick (1978) offered an even broader definition - 'a constructed experience built with feelings, ideas and cultural symbols.' It is difficult to imagine any concept in psychology to which these definitions do not at least partially apply. ...read more.

has not had something to do with it and that along with having an effect on peoples sexual behaviour it has also affected their attitudes to commitment and exclusivity. Commitment appears to be rather easier to define than love, although it is certainly not simple. Definitions include the dominant idea of engaging in or pledging to engage in a consistent line of activity (Becker 1960; Brehm and Cohen 1962; Kiesler 1971) and more specific to romantic relationships the idea of one or both partners perceiving the relationship as continuing indefinitely or directing their behaviour towards its continuation. (Hinde 1979) Fehr was interested in examining what people perceived as being the central components of love and commitment and how many attributes p[people thought the two shared. She also wanted to know what effect the two concepts had on each other. Did commitment help love to grow or did it diminish it as people began to feel trapped or take the other partner for granted? There have been various theories on the independence or otherwise of love and commitment as separate or inclusive notions. Money (1980) saw them as one and the same thing whilst Solomon (1981) stated the very opposite by saying"Love is an emotion; a commitment is a promise ............to do something or to continue to do something whatever one's feelings." ...read more.

Is this so or has the dissatisfaction always been present and the increasing secularisation of society merely made divorce easier? Bradbury and Fincham (1987) in their Contextual Model of Marriage found evidence to suggest that higher expectations led to higher marriage failure rates and also that the perceived femininity of the wife by her husband and by herself correlated positively with the likelihood of successful marriage. The degree of commitment of the partners also had a significant effect on the success of the marriage. Other theories on what enabled relationships to succeed include the subconscious devaluation of alternative partners by the people involved. Johnson and Rusbult (1989) found that contrary to expectations subjects indicated that they felt less attracted to exchange partners as their marriages progressed - Leik and Leik (1977) stated this as one of their definitions of commitment 'the unwillingness to cosider exchange partners. It would appear then that despite thousands of years of interest we are still no nearer an explanation. The large amount of work of the past 5 years has revealed some interesting findings but if anything has only made us more aware of how little we know or can predict. This may be due to the tenuous and subjective nature of the topic being explored but it is only with patient, open-minded exploration of the current approaches to love that we will have any possibility of developing the overarching theory of love that still eludes us. ...read more.