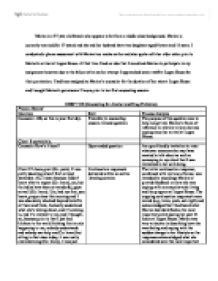 Marian is a 37 year old female who appears to be from a middle class background. Marian is currently married (for 17 years) and she and her husband have two daughters aged 9 years and 11 years. I conducted a phone assessment with Marian two weeks earli...

Marian is a 37 year old female who appears to be from a middle class background. Marian is currently married (for 17 years) and she and her husband have two daughters aged 9 years and 11 years. I conducted a phone assessment with Marian two weeks earlier and also spoke with her older sister prior to Marian's arrival at Logan House. At that time I had no idea that I would ask Marian to participate in my assignment however due to the failure of an earlier attempt I approached senior staff at Logan House for their permission. I had been assigned as Marion's counselor for the duration of her stay at Logan House and I sought Marian's permission 2 hours prior to her first counseling session. GHSP 7118 (Counseling for Alcohol and Drug Problems) Process Record Interview Skill Process Analysis Counselor: OK, so this is your first day. Preamble to counseling session. Closed question The purpose of this question was to help me get into Marian's frame of reference in relation to how she was coping since her arrival at Logan House. Client It certainly is. Counselor How's it been? Open-ended question An open friendly invitation to raise whatever concerns she may have wanted to talk about as well as conveying to my client that I was interested in her well-being. Client It's been great (Co: yeah). It was pretty daunting when I first arrived yesterday. Ah, I mean because I didn't know what to expect (Co: hmm), um, but the ladies have been so wonderful, guys as well (Co: hmm). Um, had my first, you know, proper class this morning and I was absolutely shocked beyond belief to sit there and think, I actually understand what she's talking about, and it's sinking in, and it's relevant to me, and I thought, no, because prior to that I just had blinkers to the world thinking this is only happening to me, nobody understands and nobody can help me (Co: hmm) ...read more.

Open-ended question I wanted to say, to bring to your attention that he was aware of what was going on, but Marian cut me off. Client But I didn't see that (Co: hmm). I always thought that, fine go ahead, pick on me again (Co: hmm), you know, give me another lecture (Co: hmm) give me another lecture, you know, I'm not as bad as you think, I can stop whenever I want to (Co: yeah). Well stop then, I don't want to (Co: yeah). And we started arguing, I would always try and make light of it, well at least I'm not as bad as my mother (Co: hmm), you know, um, I don't believe that I'm drunk yet (Co: yeah), I only drink at night, I only drink the one type of alcohol, I don't mix, I don't, you know, I don't drink hard liquor. There was always some sort of comeback (Co: hmm) but I thought... Counselor Well while you were perhaps rationalizing, it's ok for me to do it (Cl: yes) because I'm not doing (Cl: yes that's right) yep, yeah. Reflection of content I wanted to see if Marian was aware that she had been rationalizing in order to keep drinking. I didn't get time to finish what I wanted to say as Marian started talking. Client And a way of waking up the next morning and still being able to have a smile on me face (Co: hmm), to go back to the liquor barn and get more (Co: yeah) Counselor And not feel guilty perhaps (Cl: yeah) yeah Closed question I wanted to find out if Marian was aware the her rationalizing was a way of her minimizing her guilt. Client And another thing was that the drinking of the alcohol, although at night time I got to, there was always one point that I could never remember where I either fell asleep or I became, not unconscious, but it got to the stage where I could not remember anything (Co: hmm). ...read more.

Marian had pointed out that she had a lot to lose (e.g., friends, family) because of her drinking however her concern for her health and her acknowledgement that she was an alcoholic indicated to me that she was taking action for Marian as well as significant other's in her life. As Marian told her story I noted that, although she had been the reluctant, rebellious, and rationalizing precontemplator, she had passed through this stage into the contemplation stage. The drink driving incident and the anger and shame that Marian felt, due to the effect that alcohol was having on her relationship and her behaviour, were motivating factors for Marian moving from the contemplation stage to the action stage where she refrained from drinking for 3 weeks. Although Marian relapsed back into the contemplation stage and continued drinking, the confrontational tactics used by her husband, sister, and best friend were undoubtedly a significant factor towards Marian moving back into the action stage. The turning point for Marian was when she threatened to kill herself and although her sister and best friend challenged her, I believe it was David's decision not to intervene that prompted Marian to finally realize that she needed to take action, and the decision was up to her. In closing, I feel it is just as important for the counselor to realize that his client is motivated as it is to employ motivational techniques when there is no evidence to suggest that motivational strategies need to be adopted. Marian acknowledged her ambivalence and resistance throughout the session. Furthermore, the resistance was especially noticeable in the final confrontation with her sister and best friend when she first argued that she was needed at work, and then when she threatened to kill herself. The only changes I would have made would have been to provide a better setting for the session, be less directive (e.g., from when she was two years old) when starting the session, and be more articulate with my reflection of feeling and reflection of content responses. ...read more.