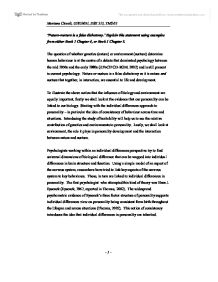 'Nature-nurture is a false dichotomy.' Explain this statement using examples from either Book 1 Chapter 4, or Book 1 Chapter 5. The question of whether genetics (nature) or environment (nurture) determine human behaviour is at the centre of a debate that dominated psychology between the mid 1950s and the early 1980s (EPoCH CD-ROM, 2002) and is still present in current psychology. Nature or nurture is a false dichotomy as it is nature and nurture that together, in interaction, are essential to life and development. To illustrate the above notion that the influence of biology and environment are equally important, firstly we shall look at the evidence that our personality can be linked to our biology. Starting with the individual differences approach to personality - in particular the idea of consistency of behaviour across time and situations. Introducing the study of heritability will help us to see the relative contribution of genetics and environments to personality. Lastly, we shall look at environment, the role it plays in personality development and the interaction between nature and nurture. ...read more.

This study shows that boldness is, to some extent, genetically determined. With increasing advances in technology there are more ways to explore the influence of genetics on our personality. The relatively new scientific discipline of molecular genetics provides new insights with biological data. With our increasing understanding of DNA, it is now possible to explore the link between certain aspects of behaviour and specific genes. In terms of personality, there has been a tentative finding that neuroticism is linked to the neurotransmitter serotonin which is coded for by one gene (Goldman, 1996; Lesch et. al., 1996, reported in Thomas, 2002). As shown above, there is clear evidence that genes influence our personality. Genes cannot, on their own, account for all aspects of personality. But how much do nature and nurture contribute to a range of individual differences, including temperament, personality traits and intelligence? The study of heritability offers to answer this question. Heritability is concerned with establishing how much our genes are responsible for our behaviour and personality. ...read more.

Also, parents do not always treat their children the same. In Loehlin's review of twin studies (1992, reported in Thomas, 2002) the contrast in childhood temperaments like shyness, inhibition and different levels of extraversion were present in MZ twins that were reared together, in the same family. In contrast, MZ twins reared apart, in different families were more likely to have similar scores. As illustrated above there is evidence that the complexity of environments has significant and complex effect on the development of individual differences in personality. However, evidence provided by studies of temperament and molecular genetics also strongly suggest that genes influence our personality. Environments and genetics are simultaneously present. It is therefore clear that nature and nurture, together and in interaction, have effect on our personality. Heritability studies have attempted to quantify their relative contribution. With increasing evidence from rapidly expanding new scientific disciplines (such as molecular genetics), it is now possible to understand the interaction between nature and nurture on a very fundamental, biochemical bases. There is no need to argue whether it is nature or nurture that is the more important. There is, however, a need to gain more insight into their mutual interaction. ...read more.