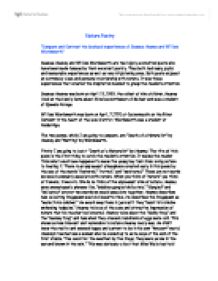 Nature Poetry "Compare and Contrast the boyhood experiences of Seamus Heaney and William Wordsworth" Seamus Heaney and William Wordsworth are two highly accredited poets who have been made famous by their excellent poetry. They both had many joyful and memorable experiences as well as very frightening ones. Both poets enjoyed an extremely close and personal relationship with nature. It was these experiences that created the inspiration needed to grasp the reader's attention. Seamus Heaney was born on April 13, 1939, the eldest of nine children. Heaney lived on the family farm about 30 miles northwest of Belfast and was a student at Queens College. William Wordsworth was born on April, 7,1770 at Cockermouth on the River Derwent in the heart of the lake District. Wordsworth was a student at Cambridge. The two poems, which I am going to compare, are "Death of a Naturalist" by Heaney and "Nutting" by Wordsworth. Firstly I am going to look t "Death of a Naturalist" by Heaney. The title of this poem is the first thing to catch the reader's attention. It makes the reader think what could have happened to make the young boy turn from loving nature to fearing it. There is an unpleasant atmosphere created early in this poem by the use of the words "festered," "rotted," and "sweltered." ...read more.

I am now going to look at "Nutting" by William Wordsworth. In this poem he describes a particular day, which you wished could last forever and would remain in your memory even through to adulthood. He expresses just how much the day meant to him in the third line, "One of those heavenly days that cannot die" indicating that he never expects to forget the incident. At the beginning of the poem, we can see his enthusiasm as he left the cottage, "sallying forth." He tells us how he left the house for the purpose of going nut picking. It is obvious that he was particularly optimistic about the amount of nuts he was going to gather, "With a huge wallet o'er my shoulder slung." A lot of preparation had taken place, showing how seriously he had taken the chore. He describes himself as a "figure quaint," wearing clothes which are "cast-off weeds," old, ragged clothes as not to destroy his good clothes by getting them torn on the thorns and brambles- the idea conjured up by his mother, a sensible, economical woman. The reader is at ease when reading this poem. It describes the way in which a very young boy sets out to do something. ...read more.

He is happy that he got so many nuts, but is disheartened when he realises how much damage he has caused. He came in with "merciless ravage," and stripped the place of all it had. He was like a thief in the night- such an apparently small action evokes a large reaction from young Wordsworth. The place previously thought to be perfect has now been spoilt to the point of devastation. Although Wordsworth should be delighted having collected so many nuts, "rich beyond the wealth of kings," Wordsworth feels a tremendous sense of guilt and remorse. In this poem Wordsworth is so happy to be going nutting and he is extremely happy to discover a new place. But then he feels guilt after taking all the nuts and is in despair at the damage caused. Throughout the poem there is a steady rhythm, and a sure sense of atmosphere. The poem begins describing the beauty of nature but ends in showing how the most seemingly insignificant actions can results in causing utter destruction and spoilage. Both of the poems I studied were written by poets with vivid imaginations and the talents of being able to show various perceptions of nature. I hope I have successfully shown how both Seamus Heaney and William Wordsworth have conveyed memories of their childhood in their poems. ...read more.