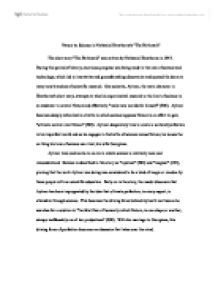 Nature vs. Science in Nathaniel Hawthorne's "The Birthmark" The short story "The Birthmark" was written by Nathaniel Hawthorne in 1843. During this period of history, enormous progress was being made in the area of science and technology, which led to innovative and groundbreaking discoveries and opened the doors to many new branches of scientific research. One scientist, Aylmer, the main character in Hawthorne's short story, attempts to take his experimental research to the limit of science in an endeavor to control Nature and effectively "make new worlds for himself" (396). Aylmer becomes deeply enthralled in a battle in which science opposes Nature in an effort to gain "ultimate control over Nature" (396). Aylmer desperately tries to create a world of perfection in his imperfect world and as he engages in the battle of science versus Nature, he looses the on thing his love of science can rival, his wife Georgiana. Aylmer lives and works in an era in which science is relatively new and misunderstood. Science is described in this story as "mystical" (396) ...read more.

Georgiana did not want to be Aylmer's "object of horror and disgust" (399) so she confronts him about using his scientific expertise to remove the blemish placed upon her face by Nature. Aylmer is delighted when he learns that his wife wants to be rid of the birthmark. He finally gets an opportunity to use his scientific understanding to overcome the power of Nature. With the help of his assistant Aminadab, Aylmer sets up a boudoir for Georgiana in his lab where he will conduct the experiment. This is the first time Georgiana has ever crossed the threshold into his laboratory. Aylmer keeps his professional work a secret from his wife but he does show her some of his experiments in which he believes he has conquered the power of Nature. These include beautiful, flawless flowers and a solution with which one can wash freckles right off the skin (403). While waiting for the experiment to commence, Georgiana pokes around in Aylmer's scientific library and finds a folio that contains notes and observations of every experiment he ever conducted. ...read more.

Instead of being concerned for the safety and well being of his wife, Aylmer, like a true scientist, writes down observations about his experiment and nothing more. The birthmark immediately begins to diminish in color and after a brief moment of what he thinks is success, Aylmer discovers that this experiment, just like the others, is a failure. In her dying words, Georgiana tells Aylmer to "not repent that, with so high and pure a feeling, [he has] rejected the best earth could offer" (409). As a scientist, Aylmer was torn between two opposing forces: science and Nature. Science, being relatively new and unexplored, seemed to have endless opportunities for Aylmer. He truly believed that through the power if science, he could overcome all the imperfections created by Nature. His wife was so close to perfection that the tiniest imperfection, the birthmark, drove him crazy. In an attempt to create a fictitious world in which everything was flawless, Aylmer lost his wife, the closest thing he had to perfection. Aylmer, like many people around the world, underestimated the power of Nature. Nature is a force to be left untamed and any attempt by mankind to control it, as history has shown, will often result in disastrous consequences. ...read more.