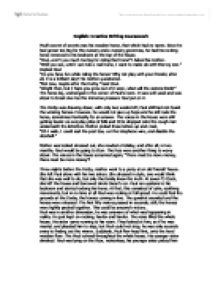 Paul's secret of secrets was his wooden horse, that which had no name

English- Creative Writing Coursework Paul's secret of secrets was his wooden horse, that which had no name. Since he had grown too big for the nursery and a nursery governess, he had his rocking horse removed to his bedroom at the top of the house. "Paul, aren't you much too big for riding that horse"? Asked his mother. "Well you see, until I can ride a real horse, I want to make do with this toy one." Replied Paul "Do you have fun while riding the horse? Why not play with your friends; after all, it is a brilliant day? His mother questioned. "Not now, maybe after the Derby." Said Paul. "Alright then, but I hope you grow out of it soon, what will the visitors think?" The horse lay, unchanged in the corner of Paul's room. It was well used and was about to break due too the immense pressure Paul put on it. ...read more.

She dressed in style, one would think that she was well to do, but only the family knew the truth. At seven 'O Clock, she left the house and borrowed Uncle Oscar's car. Paul ran upstairs to his bedroom and started rocking his horse. At first, this consisted of calm, soothing movements, but in no time at all Paul was rocking at full speed. He could feel the grounds at the Derby, the horses coming in line. The gunshot sounded and the horses were released. The first fifty metres passed in seconds; still; the horses were tightly packed together. This could be anyone's victory... Paul was in another dimension, he was unaware of what was happening in reality. He just kept on rocking, harder and harder. The noise filled the whole house. His sister came running to his room. They looked at him, as if he was mental, and pleaded him to stop, but Paul could not stop, he was only seconds away to finding out the winner. ...read more.

"Hello darling, you're not fighting with Paul are you, because if you are..." Lissa tried to speak but no words came out of her mouth. She just froze silently. "Hello, Hello?" Lissa finally spoke, "Mum, Paul hurt himself on the rocking horse, I called the ambulance, and Paul is unconscious..." "Oh my lord, wait, don't worry, I'm coming. I will be 10 minutes." Lissa put down the receiver and ran upstairs to Paul's room. The paramedics were asking Sharon, Paul's older sister about any allergies. Sharon could not speak either; she was in shock. The paramedics lifted Paul onto the stretcher and carried him downstairs. Paul lay on the stretcher, his eyes closed, and an oxygen mask on his face. He lay there peacefully, but he was still sweating, so much that his clothes smelled. They reached the ambulance and opened the door, and then they brought the ramp down and secured the stretcher into the cabin. Paul's mother then approached speeding down the road to the ambulance... and that was all he could remember. ...read more.