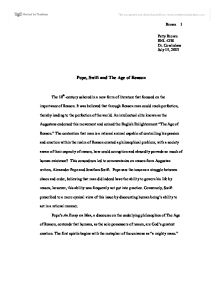 Pope, Swift and the age of reason.

Patty Brown ENL 4230 Dr. Cowlishaw July 15, 2003 Pope, Swift and The Age of Reason The 18th-century ushered in a new form of literature that focused on the importance of Reason. It was believed that through Reason man could reach perfection, thereby leading to the perfection of the world. An intellectual elite known as the Augustans endorsed this movement and coined the English Enlightenment "The Age of Reason." The contention that man is a rational animal capable of controlling his passion and emotion within the realm of Reason created a philosophical problem; with a society aware of their capacity of reason, how could corruption and absurdity pervade so much of human existence? This conundrum led to commentaries on reason from Augustan writers, Alexander Pope and Jonathan Swift. Pope saw the issue as a struggle between chaos and order, believing that man did indeed have the ability to govern his life by reason; however, this ability was frequently not put into practice. Conversely, Swift prescribed to a more cynical view of this issue by discounting human being's ability to act in a rational manner. Pope's An Essay on Man, a discourse on the underlying philosophies of The Age of Reason, contends that humans, as the sole possessors of reason, are God's greatest creation. ...read more.

In Gulliver's third voyage to the land of Laputa, Swift seems to share Pope's assertion that there lies a danger in the wastefulness of pride in human nature; however, by his fourth voyage to the land of the Houyhnhnms, Swift paints a far more cynical picture of mankind as he reveals the barbarism of humanity. With Gulliver's arrival in Laputa, Swift aims his satirical artillery at eighteenth century academia. The device of an island that floats above the rest of the world represents Swift's belief that an excess of speculative reasoning disconnects man from the practical realities of life. The Laputans employed servants, known as "flappers," to strike them upon the mouths and ears in order to prompt their conversations. Gulliver realizes that "the minds of these people are so taken up with intense speculations, that they can neither speak, nor attend to the discourses of others, without being roused by some external taction upon the organs of speech and hearing" (161). Because the thoughts and minds of these people were so disengaged they were unable to perform simple tasks such as navigating through a room or even remaining balanced upon their own two feet. The ridiculousness of this overly intellectual culture demonstrates the negative aspect of a community so absorbed by their own personal illusions that they fail to serve the advancement of their society. ...read more.

Gulliver was horrified when he "could no longer deny that [he] was a real Yahoo in every limb and feature" (279). Rather than reasonably accepting his place in the chain of being, he is disgusted by his own species and chooses to identify with the Houynhmn culture, where he "enjoyed perfect health of body, and tranquility of mind" (289). With Gulliver's expulsion from the land of the Houyhnhms, it appears Swift is defending his initial argument that man's follies are a part of nature that cannot be simply reasoned away. It is only rational that the Houynhmns can exist without passion and emotion because they are horses; Gulliver, after all, is a human. The cynical twist, however, occurs when Gulliver returns to England. His refusal to reintegrate into human society suggests that the extent of mankind's barbarism and lack of Reason renders them undeserving of any sympathy. Gulliver confesses, "so horrible was the idea I conceived of returning to live in the society and under the government of Yahoos...degenerating into the vices and corruptions of my own species"(297). Pope's An Essay on Man and Swift's Gulliver's Travels both serve as a discourse on the capabilities and limitations of human Reason. The differences however, lay in the extent in which the two authors believe this Reason benefits society. While Pope strongly maintains, "Whatever is, is Right," Swift, as seen through the emotional demise of Gulliver, suggests what is, is terribly wrong; that the human race is barbaric and hopeless. 1 Brown ...read more.