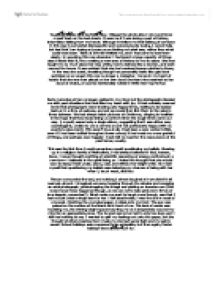 Short Story.You never realise how fast time flies. I flipped the photo album shut and threw myself back

You never realise how fast time flies. I flipped the photo album shut and threw myself back on the bed sheets. It were as if I was losing a part of history, information falling from my hands. Although it strikes me that talking of someone in this way is somewhat disrespectful and subconsciously taxing, I cannot help but feel that I am losing out more so on finding out what was, rather than what could have been. Tales of 50's life thrilled me, and I had come to love them dearly. In acquiring this new obsession I had learnt a large capacity of things about World War II, thus creating a new area of history for me to adore. She had taught me so much about her way of life, how to behave like a woman, and work around the house. It was evident that she had received lessons similar to these, in the way she acted, streaking though her personality traits like gold dust sprinkled on an angel; this now no longer a metaphor. I knew in my heart of hearts that she was now placed on her own cloud (number nine reserved as her cloud of choice, of course) ...read more.

She sent me one back, seeing through its false nature. I had finished a poem that morning, which was meant to be recited in the chapel. The words span through my mind again, retracing steps, just to make them a little deeper, to help me remember. "So now I feel I should let go, I'm giving up the fight, so now, please know I Love You, I Love You and Goodnight." I whispered as we piled into the car. The radio was playing softly, humming the worst song it could have at that point. Ain't No Sunshine filled most of the journey, until my mother wearily hit the radio into a standby mode. The rest of the way was travelled in silence. I had grown up attending Marston Bedford Road Sunday School, every week since the day I could walk. My mother, and her mother (along with my aunts and uncles, also) had don't the same as children. Everyone was married in that same chapel too, so it was only right that we should hold my Great Grandmothers' funeral there. "Joan Kathleen Smith," Reverend Solice began, pacing around the mahogany pulpit, "was a treasured member of the community." ...read more.

Our tears had dried, and no fresh ones had fallen yet. We had gone through about seven rounds of tea and the sky's colour had begun to fade. I smiled as I watched my siblings playing with Ashley's old toys and friends of my Great Grandmothers gossiping like school girls. Life was moving on, even if it was going a bit too fast for me. Everything would re align itself soon, we just had to make sure we were there, ready for it to happen. My mother grouped me and my siblings together and led us to the car. She hugged my Grandmother goodbye as she received some words of wisdom (my Grandmother had been through this before, losing her partner and father unexpectedly. The car was started and we set off home again. It had been over faster than I had thought, and although dreadful, it was not as terrible as I thought it could be. Losing my Great Grandmother was a horrible thing, bringing disastrous emotions, but it had some positive outcome on me as a person. I feel it has enhanced my faith, and my ability to deal with loss. I now know that we are to live life to the full, making the most while we can, as it may be snatched away at any given moment by disease. ...read more.