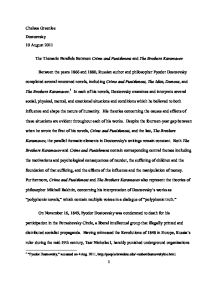 The Thematic Parallels Between Crime and Punishment and The Brothers Karamazov

Chelsea Greenlee Dostoevsky 10 August 2011 The Thematic Parallels Between Crime and Punishment and The Brothers Karamazov Between the years 1866 and 1880, Russian author and philosopher Fyodor Dostoevsky completed several renowned novels, including Crime and Punishment, The Idiot, Demons, and The Brothers Karamazov.1 In each of his novels, Dostoevsky examines and interprets several social, physical, mental, and emotional situations and conditions which he believed to both influence and shape the nature of humanity. His theories concerning the causes and effects of these situations are evident throughout each of his works. Despite the fourteen-year gap between when he wrote the first of his novels, Crime and Punishment, and the last, The Brothers Karamazov, the parallel thematic elements in Dostoevsky's writings remain constant. Both The Brothers Karamazov and Crime and Punishment contain corresponding central themes including the motivations and psychological consequences of murder, the suffering of children and the foundation of that suffering, and the effects of the influence and the manipulation of money. Furthermore, Crime and Punishment and The Brothers Karamazov also represent the theories of philosopher Mikhail Bakhtin, concerning his interpretation of Dostoevsky's works as "polyphonic novels," which contain multiple voices in a dialogue of "polyphonic truth." On November 16, 1849, Fyodor Dostoevsky was condemned to death for his participation in the Petrashevsky Circle, a liberal intellectual group that illegally printed and distributed socialist propaganda. Having witnessed the Revolutions of 1848 in Europe, Russia's ruler during the mid-19th century, Tsar Nicholas I, harshly punished underground organizations that he perceived to be a threat to the Russian autocracy. The execution, which was, in reality, a sadistic mock ceremony meant to punish the radical prisoners psychologically, greatly affected Dostoevsky, especially concerning his political and religious convictions and the preoccupations of his psyche. Influenced by his close encounter with death, by the brutal murder of his father at the hands of serfs who were never brought to justice, and by the death of his own son Alyosha in 1878, Dostoevsky employed the subject of death ...read more.

The misery of the Marmeladov children's situation is continuous throughout the novel, worsening after the death of their father and even further after the death of their mother. At the end of the novel, they are finally granted a level of reprieve when Svidrigailov bequeaths his estate to the orphans and commits suicide. In both Crime and Punishment and The Brothers Karamazov, the link between children and suffering is often a weak and incompetent father figure who struggles with an addiction to alcohol. As he emphasizes the social dilemma of children in his society, Dostoevsky also analyzes the issue of drunkenness and the ramifications of addiction, especially concerning family life and the education of children in such conditions. A drunk who squanders his money on liquor, Marmeladov forces his family to suffer poverty and embarrassment as a result of his alcoholism and, in the end, dies as a result of it. Ilyusha's father, Captain Snegiryov, is a humiliation to his son as a result of his drunkenness and the consequences of the fight that he loses against Dmitri. Though the plot of The Brothers Karamazov focuses on the adult lives of Dmitri, Ivan, and Alyosha, it is insinuated that much of their childhood was spent in suffering as a result of their father, Fyodor Pavlovich, who abandons them and is, at best, a depraved drunk. Throughout much of his life, Dostoevsky was burdened with immense financial troubles, a struggle which was often reflected in his writing. In 1864, Dostoevsky's brother, Mikhail, died after a period of critical illness. Shortly before his death, Mikhail established a new magazine, The Epoch, to which Fyodor Dostoevsky greatly contributed. Following Mikhail's death, Dostoevsky was unable to keep the magazine alive without his brother's management skills, and was obliged to pay off the magazine's debt when it failed. Feeling that he was financially responsible for Mikhail's derelict family, Dostoevsky borrowed money from friends and family in order to help support their livelihood. ...read more.

Ivan proclaims that he rejects the world that God has created because it is built on a foundation of suffering. He narrates to Alyosha this poem, which describes a leader from the Spanish Inquisition and his encounter with Jesus, Who has made His return to Earth. In the poem, Jesus is rejected by the Inquisitor, who puts Him in jail. Alyosha, who is deeply disturbed by the poem's content and implication, as well as by Ivan's nihilistic convictions, represents a Christ-based reason, which interacts in a polyphonic dialogue with Ivan's more radical theories. Throughout each of his novels, author Fyodor Dostoevsky examines and interprets several different social, mental, physical, and ideological circumstances which he believes to influence the nature of humanity. These theories, which reflect his own convictions, serve as corresponding thematic elements within each of his novels. His first novel, Crime and Punishment, and his last novel, The Brothers Karamazov, depict several parallel themes, each of which is characteristic of Dostoyevsky's works. In both Crime and Punishment and The Brothers Karamazov, murder, the suffering of children, and the power of money are central themes which are addressed throughout the novels. Likewise, both novels represent the theories of Russian philosopher Mikhail Bakhtin, who describes Dostoevsky's works as "polyphonic novels," which contain multiple voices in a complicated dialogue. Through his works, Dostoevsky offers a philosophical critique of society and a description of the way in which he viewed the world. 1 "Fyodor Dostoevsky," accessed on 4 Aug. 2011, http://people.brandeis.edu/~teuber/dostoevskybio.html. 2Ibid. 3 Fyodor Dostoevsky, The Brothers Karamazov, Trans. Richard Pevear and Larissa Volokhonsky, (New York: Knopf, 1990), 625. 4 Fyodor Dostoevsky, Crime and Punishment, Trans. Richard Pevear and Larissa Volokhonsky, (New York: Knopf, 1993), 53. 5 Ibid., 89. 6 The Brothers Karamazov, 621. 7 Crime and Punishment, 26. 8 "The Brothers Karamazov," accessed on 4 Aug. 2011, http://www.dartmouth.edu/~karamazo/bio_all.html. 9 The Brothers Karamazov, 8. 10 Class notes on Bakhtin, James Roney, 8 Feb. 2011. 11 Ibid. 12 Ibid. 13 Ibid. 14 Crime and Punishment, 263. ?? ?? ?? ?? 1 ...read more.