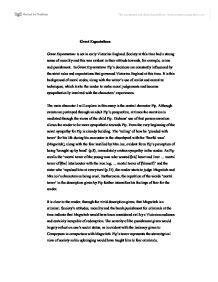 Great Expectations. The main character I will explore in this essay is the central character Pip. Although events are portrayed through an adult Pips perspective, at times the narration is mediated through the views of the child Pip.

Great Expectations Great Expectations is set in early Victorian England. Society at this time had a strong sense of morality and this was evident in their attitude towards, for example, crime and punishment. In Great Expectations Pip's decisions are constantly influenced by the strict rules and expectations that governed Victorian England at this time. It is this background of moral codes, along with the writer's use of realist and narrative techniques, which invite the reader to make moral judgements and become sympathetically involved with the characters' experiences. The main character I will explore in this essay is the central character Pip. Although events are portrayed through an adult Pip's perspective, at times the narration is mediated through the views of the child Pip. Dickens' use of first person narration allows the reader to be more sympathetic towards Pip. From the very beginning of the novel sympathy for Pip is already building. The 'telling' of how he 'pleaded with terror' for his life during his encounter in the churchyard with the 'fearful man' (Magwitch), along with the fear instilled by Mrs Joe, evident from Pip's perception of being 'brought up by hand' (p.8), immediately evokes sympathy in the reader. ...read more.

As Pip grows, his thoughts and perceptions change. His introduction to the upper class world, when he first visits Miss Havisham, marks the change in his perception of morality. As Pip's love for Estella deepens, compassion for Pip also deepens as his love for Estella becomes clear and we learn of Miss Havisham's intention for Estella to 'break his heart' (p.59). The writer's use of dialogue to present the character of Estella is also an effective way of encouraging the reader's sympathy for Pip, and indeed Estella herself. The dialogue between Pip and Estella during his visits to Satis House evokes sympathy for Pip by providing the reader with a truthful representation of the actual words spoken between the two characters, thus allowing the reader to judge for themselves the cold heartedness and manipulation that Pip suffers at her hands. When Estella cruelly mocks Pip for calling 'knaves Jacks' and refers to him as a 'common labouring boy' with 'thick boots' and 'coarse hands' (p.59), Pip begins to question his upbringing. Furthermore, when the reader becomes aware that the words spoken by Estella are a result of Miss Havisham's manipulation of her, it invites sympathy for Estella too. Estella is raised by Miss Havisham who cruelly influences her to be a cold, heartless mirror image of herself. ...read more.

and 'O Lord be merciful to him...' (p.455), show how much Pip's attitude and feelings towards him have changed. Dickens uses first person narrative and only Pip's direct speech in order to further increase the reader's sympathy for Magwitch as he lay dying. Had he spoken, the compassion felt by the reader for Magwitch may not have been so intense, which shows how Dickens uses the first person narrative as a means of eliciting involvement and sympathy with his characters. It is after the capture and death of Magwitch that Pip learns his greatest lesson. His 'heart was deeply and most deservedly humbled' (p.416) as he thinks of Joe and realises that what he has been searching for his whole life has always been there and that real self-improvement is in no way connected to social advancement or material gain. Throughout Great Expectations, Dickens actively invites the reader to make moral judgements and become sympathetically involved with the characters experiences. By presenting his characters using realist and narrative techniques the reader is encouraged to question the characters and their morality. It is as we follow Pip through his life, during a time where social status was often considered more important than a person's virtues that we are able to sympathise with the character's lives and experiences. ...read more.