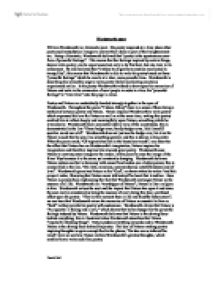 Wordsworth essay William Wordsworth is a Romantic poet. His poetry responds to a time when other poets used metaphysical images to convey their ideas as part of the Enlightenment era. Being a Romantic, Wordsworth believed that "poetry is the spontaneous over-flow of powerful feelings". This means that the feelings inspired by certain things, shown in his poetry, can be experienced not only in its first heat, but also later in its refinement. He also believed that "it takes its origin from emotion recollected in tranquillity", this means that Wordsworth is able to write his poetry based on these "powerful feelings" which he recalls at a later, more peaceful time. Wordsworth is describing his irresistible urge to write poetry whilst recollecting emotions experienced earlier. In his poetry Wordsworth wished to draw upon his memories of Nature and write in the vernacular of rural people in order to allow his "powerful feelings" to "over-flow" onto the page in verse. Poetry and Nature are undoubtedly bonded strongly together in the eyes of Wordsworth. Throughout the poem "Tintern Abbey" there is a sense of there being a symbiosis between poetry and Nature. ...read more.

Wordsworth claims that Nature is "An appetite: a feeling and a love," which shows that he has hunger for the powerful feelings induced by Nature. Wordsworth believes that Nature is the driving force behind everything, this is illustrated when Wordsworth describes that Nature "impels/All thinking things". Nature pushes everything onwards and to Wordsworth Nature is the driving force behind his poetry. The idea of Nature evoking poetry inspiring thoughts is again exemplified in the phrase, "for she can so inform/The mind", here we see how Nature evokes Wordsworth's greatest thoughts, which enables him to write such fine poetry. In the poem, Wordsworth describes many emotions, as well as his spiritual notions about Nature and his awe at he power of Nature. He creates a peaceful, sensual image at an early stage when he describes how the waters roll "from their mountain springs/ With a soft inland murmur." Wordsworth demonstrates his belief that there is a spiritual element in Nature when he says "Do I behold these steep and lofty cliffs" as "behold" is a word often associated with Biblical texts. ...read more.

He comments on this again later "when the fretful stir" hangs "upon the beatings of my heart", "I turned to thee". Wordsworth turns to Nature when affected by the "fever of the world", to gain solace or release from the stresses of life. "The picture of the mind revives again" when one uses memories of Nature to refresh oneself in moments of "perplexity". There is a suggestion that Nature is similar to a rebirth as Wordsworth writes how it "revives". He makes the point that Nature should give joy when "recollected in tranquillity" in the lines "in after years, / When these wild ecstasies shall be matured / Into a sober pleasure". In this poem, Wordsworth heavily emphasises his views that "poetry is the spontaneous over-flow of powerful feelings", which "takes its origin from emotion recollected in tranquillity." He argues that poetry and Nature are inexplicably linked and in harmony with one another. The power of the fusion of Nature and poetry evoke powerful feelings and emotions in Wordsworth, as well as spiritual notions about Nature. Wordsworth recollects these sensations, at a later point. ?? ?? ?? ?? Daniel Bell ...read more.