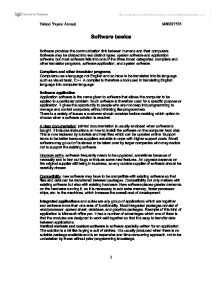 Software provides the communication link between humans and their computers. Software may be divided into two distinct types: system software and application software, but most software falls into one of the three broad categories: compilers and other translator programs, software application, and system software.

Compilers and other translator programs

Computers use a language not English and so have to be translated into its language such as visual basic, C++. A compiler is therefore a tool used in translating English language into computer language.

Application software is the name given to software that allows the computer to be applied to a particular problem. Such software is therefore used for a specific purpose or application. It gives the opportunity to people who are not deep into programming to manage and control computers without thinking like programmers.

There is a variety of issues a customer should consider before deciding which option to choose when a software solution is required.

A clear documentation: printed documentation is usually enclosed when software is bought. It includes instructions on how to install the software on the computer hard disk. This is now replaced by tutorials and help files which can be updated online.

Vertical markets and custom software is software specially written for an application. The solution is a bit like buying a suit of clothes. It is usually produced when there is no suitable package available and is an expensive and time consuming approach, not to be undertaken by those without prior programming knowledge.

System software is the program used to control the hardware of the computer directly. The purpose of the system software is to take control of the inputs, outputs, interrupts and storage. In most cases it does this efficiently, without us being aware of it.

System software is taken to include operating system and utility programs.

The file management utility lets users view, rename, copy, move and delete files and folders. Managing files from applications allows you to save a copy of a new or revised document. Four basic operations are usually supported, these are open, save as, save and close.

Use the open files to select a document that has been already created but saved till it is required to continue working on it or make changes. The save as is used when a new document is created and need to be saved on the hard disk. The save option allows users to save an existing document that has just been opened. Any enhancement from an existing document can be saved on the same document by just clicking the save button.

Software piracy the illegal copying of computer software and it is reckoned to cost billion of dollars a year. There are organizations against software theft which aims to prevent illegal use of software and has a policy of prosecuting anyone found to be breaching copyright law.