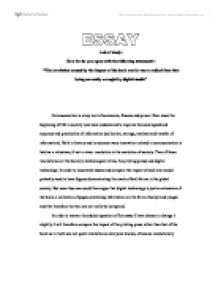 Axis of study: How far do you agree with the following statement?: "The revolution caused by the impact of the book was for more radical than that being currently wrought by digital media" Communication is a key tool of commerce, finance and power. Ever since the beginning of life in society men have endeavored to improve the scale speed and accuracy and practicality of information (collection, storage, analysis and transfer of information). Both in history and in science every innovation related to communication is held as a milestone, if not a minor revolution in the evolution of society. Two of those innovations are the book (in technological terms, the printing press) and digital technology. In order to accurately assess and compare the impact of each one would probably need to have figures demonstrating the reach of both forms in the global society. But even thus one could then argue that digital technology is just an extension of the book, a collection of pages containing information on the form of script and images and that therefore the two can not really be compared. In order to answer the subject question of this essay I have chosen to change it slightly, I will therefore compare the impact of the printing press rather than that of the book as in truth was not quite revolution as everyone knows; of course revolutionary ideas were compiled in books but they were often propagated in the form of double-sheet and leaflets or pamphlets (which do not quite qualify as books). ...read more.

Its revolutionary effect is on the whole uncontested. The digital era has started in 1947 with the invention of the micro-transistor chip and the subsequence evolution in semiconductor microelectronics techniques. Digital technology is nowadays a key aspect of all media technology; it is present in television, radio, press and obviously the internet despite the omnipresence in today's societies. It is very difficult to asses the impact of digital media on the modern world, primarily because the technologies fuelling the digital revolution are still being developed at an astonishing rate, every six month or so improvements are made that bring new possibilities in the collection storing processing and transfer of information. It is also difficult because of the breadth of the impact of information technologies to this day. So many areas of life are being affected that it is not yet quite possible to see which are really long-term and not just transitory effects (although one can still argue that after all everything is transitory) and which are really relevant and significant effects. At present some of the effects are contradictory, marginal ideas are becoming very easy and cheap to propagate, power is decentralized but it is becoming increasingly easy to control and monitor those currents and the groups involved. There in no lack of works attempting to draw a clear picture of what the digital age may lead to. There is a plethora of books and essays treating on the subject and despite that we can only always come back to one conclusion, it is that we are in the midst of it and still walking into the future and the big picture is not clear yet. ...read more.

It is only in the 1970's and 1980's that the consequences of the advent of the book and the printing press where clearly identified, analyzed and supported by facts by Elizabeth Eisenstein. This means five hundred years after Gutenberg unveiled his printing press in 1460 and a thousand year after the first similar system invented in China. It is only sixty years since the first digital coding transistor was built in 1947 and sixty-eight years since Bell conceived the idea 1939. It is unlikely that the impact of digital media will be clearly seeable before another few decades. Therefore I can not bring a precise answer to the essay question as such, it would be as silly as comparing flour and bread or grapes and wine. To this day digital media have only improved our ability to collect process and analyze data. Undoubtedly there are people somewhere already now who hope to bring revolution by using digital media, but whether those revolutions will happen or not is yet to be seen. If asked whether I think that digital media will have in the end a greater end more revolutionary and radical effect than the printing press has had in the past five hundred years, then my answer will be "No", probably the same answer people in 1500 would have given if asked whether the printing press was going to change the world. But there again, considering the knowledge I and We, collectively, have of the past, I guess my answer is very nave but the future only will prove me wrong. ...read more.