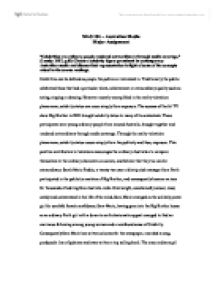 MAS 104 - Australian Media Major Assignment "Celebrities are ordinary people rendered extraordinary through media coverage." (Lumby 1997, p.82) Choose a celebrity figure prominent in contemporary Australian media and discuss their representation in light of some of the concepts raised in the course readings. Celebrities can be defined as people the public are interested in. Traditionally the public celebrated those that had a particular talent, achievement or extraordinary quality such as acting, singing or dancing. However recently exemplified in the reality television phenomena, celebrity status can occur simply from exposure. The success of the hit TV show Big Brother in 2001 brought celebrity status to many of its contestants. These participants were young ordinary people from around Australia, brought together and rendered extraordinary through media coverage. Through the reality television phenomena, celebrity status occurs simply from the publicity and thus, exposure. This positive contribution to television encourages the ordinary Australian to compare themselves to the ordinary characters on screen, and believe that they too can be extraordinary. Sarah Marie Fedele, a twenty two year old strip club manager from Perth participated in the publicity machine of Big Brother, and consequently became an icon for thousands of adoring fans Australia-wide. ...read more.

"I just think she's the most gorgeous little woman on this Earth. She is what I want to be because I am shy. I love watching people and thinking, 'Hey they are just like me'. I am normal." This quote illustrates that people don't only celebrate extraordinary talented people placed on a pedestal, but ordinary flawed people just like Marcella are now celebrated for being themselves. Sara-Marie was an ordinary girl with an extraordinary appeal to the audience, which led to celebrity status through the media coverage of Big Brother. Sydney University's associate professor of media studies Cathrine Lumby has studied several hundred girls to examine their response to the reality television program Big Brother, and their response in particular to Sara-Marie. "The reason they loved her wasn't because she was a good role model or because she was fat...they didn't care about that. They liked the fact she just liked herself regardless of what she looked like." Like many celebrities however, Sara-Marie and Big Brother did receive criticism for their attempt to turn ordinary Australians into celebrities. Germaine Greer claims"People who like watching torture will tune in regularly to see a table dancer, an air steward, a hairdresser, a medical rep and a website designer struggling with the contradictions inherent in having simultaneously to bond with and betray perfect strangers." ...read more.

She joined the Ten Network in 2002 with her first assignment as a reporter for Totally Wild. Sara-Marie also returned to the Big Brother house that made her a celebrity to participate in Celebrity Big Brother for Charity for Network Ten. In addition to ongoing television appearances, Sara-Marie is a regular contributor to Total Girl magazine whose circulation is climbing to over 80, 000 copies and has only been on the stands since November 2002. Sara-Marie maintains her huge appeal to the children's market and has embarked on a new path in 2003 with an extension into youth related issues such as drink driving and a public health campaign. Sara-Marie is now truly living like a celebrity. Although the traditional celebrated figures were those who had a particular talent, achievement or extraordinary quality such as acting, singing or dancing, Sara-Marie has shown that even an ordinary girl from Perth can be a celebrity. Celebrities are people the public are interested in. Traditionally the public celebrated those that had a particular talent, achievement or extraordinary quality. However recently exemplified in the reality television phenomena, celebrity status can occur simply from exposure. Sara-Marie went into the Big Brother house a strip club manager from Perth with high hopes, and can out to a large fan base, record deals, sponsorship, and a huge appeal to the women and children market. ...read more.