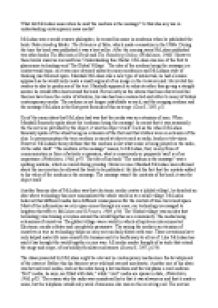 What did McLuhan mean when he said 'the medium is the message'? Is this idea any use in understanding contemporary mass media?

﻿What did McLuhan mean when he said 'the medium is the message'? Is this idea any use in understanding contemporary mass media? McLuhan was a world renown philospher, he earned his name in academia when he published the book Understanding Media: The Extension of Man, which made a sensation in the 1960s. During the time the book was published it was a best seller. After the coming years McLuhan published two other books The Mechanical Bride and The Gutenberg Galaxy (Finkelstein, 1968). However these books wasnt as successful as 'Understanding thie Media'. McLuhan was one of the first to glamourise technology and 'The Global Village'. The idea of the medium being the message is a contraversial topic, as it was once deemed usless by many academics and McLuhans style of thinking was frowned upon. Marshall McLuhan was a new type of intelectual, he had a mosaic approach as he would only create a small segment of an image in the viewers mind. He invited his readers to also be producers of the text. Marshalls approach to subjects rather than giving a straight answer he would often beat around the bush. ...read more.

McLuahn believed that different media have different consequences for the control of time travel and space. Most of the information we rely upon comes through our eyes; our technology is arranged to heighten that effect ( McLuhan and R.Powers, 1989, p36). The 'Global village' was an idea that technology was brining everyone around the world together as a community. The media being extensions of ourselves. The global village was a world in which all aprts are interconnected. Electronic meida is faster and completely persuasive. The saying the media is an etension of ourselves is true as technology helps us carry out our daily duties with ease. These inventions have only helped make life more smooth for humans and it is benficisary to all us of. Like McLuhan has said it has brought the world together in one way. All media maybe thought of as tools that extend the range and scope, of our boldily faculities and senses (Scannell, 2007, p134). The ideas presented by McLuhan might be relevant in contemporary media since the development of the interent. ...read more.

This is because the object has become a part of ourselves as the apps and programmes on the device has made life more simplistic. This iw aht McLuhan meant when he said that media is an extension of man. ?However, with such tools, the true ?extensions of man? lie not in the physical tool itself but in the essential growth of the senses and skills represented by it (Finkelstein, 1968, p62). Many of McLuhans are useful after the invention of the internet but he is far from a saint. ?Prophets once cried out in the wilderness, but there is no such inattention to the brilliant prophet of our own time, Marshall McLuhan (Finkelstein, 1968, p7). Bibilography Richard Cavell, (2003). McLuhan in space: A culture geography. University of Toronto press incorporated 2002. Sidney Finkelstein, (1968). Sense & nonsense of McLuhan International Publishers 381 Park Avenue south, New York. Marshall McLuhan and Bruce R.Powers (1989). The Global Village: Transformations in world life and media in the 21st Century. Oxford university print press Paddy Scannell, (2007). Media and Communication. SAGE publications limited. ...read more.