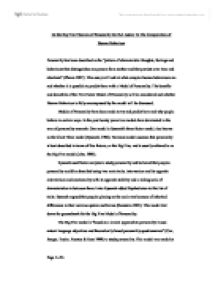 Do the Big Five Theories of Personality Do Full Justice To The Complexities of Human Behaviour Personality has been described as the "pattern of characteristic thoughts, feelings and behaviours that distinguishes one person from another and that persists over time and situations" (Phares 1997). This essay will look at what complex human behaviours are and whether it is possible to predict them with a Model of Personality. The benefits and downfalls of the Five Factor Model of Personality will be considered and whether Human Behaviour is fully encompassed by the model will be discussed. Models of Personality have been made to try and predict how and why people behave in certain ways. In the past twenty years two models have dominated in the area of personality research. One model is Eysenck's three-factor model, also known as the Giant Three model (Eysenck, 1994). Normans model assumes that personality is best described in terms of five factors, or the Big Five, and is usually referred to as the Big Five model (John, 1990). Eysenck used factor analysis to study personality and believed that peoples personality could be described using two main traits, introversion and its opposite extroversion and emotionality with its opposite stability and a sliding scale of characteristics in between them. ...read more.

as well as Asian languages like Chinese (Trull & Geary, 1997)" (Scholte & De Bruyn 2003). The most widely used measure of the big five is the revised NEO Personality Inventory (Neo-pi-r; Costa & McCrae, 1992) "This instrument has received extensive empirical support and is based on a hierarchical structure of personality. On a higher order level the NEO-PI-R assesses the big five domains...for each of these domains there are six corresponding lower order facets" (Cox, Borger et al 1999) Even though the Big Five model is probably the most widely used in personality assessment research to date, it is recognised that the model has limitations and it has been suggested that the model is not fully developed. (Almagor, Tellegen, & Waller, 1995) suggested that in fact there are seven traits defining personality. Five of the factors were the same as the five-point model but the other two were "evaluative or valence factors" (Scholte & De Bruyn 2003). Some studies have put in doubt the cross-cultural ability of the model. In a number of Italian studies on the Big Five factors, some factors with slightly different meanings tended to emerge, even if the same samples and variable selection procedures were used as in other studies. ...read more.

(Jang, McCrae, Angleitner). The same studies also show that a substantial amount of variation is due to non-genetic factors. Some studies have shown that the role of genetic factors in shaping personality has been overestimated and the role of environment underestimated (Funder 2001). This would affect the validity of the Big Five as this relies on traits a genetically based attribute. At the moment it seems that the Big Five model works well and is widely used in the effort to further understand and predict personality. However the Five Factor model of personality only takes into account traits which are genetic attributes and so can not be seen as a full account for personality. To get a true perspective of ones personality, all four areas as described by Ozer 1999, life outcomes, situational tests, observer ratings and self reports must be analysed. It has been stated that only 20% to 55% of the variation in personality comes from genetic factors this view is supported by a number of psychologists and it is a major factor in the validity of the Big Five model. If this view is correct then the model can only ever be a maximum of 55% accurate which is not nearly good enough. ...read more.