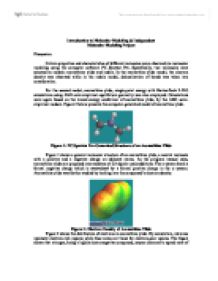 Introduction to Molecular Modeling & Independent Molecular Modeling Project Discussion: Certain properties and characteristics of different molecules were observed via molecular modeling using the computer software PC Spartan Pro. Specifically, two molecules were selected as models: azomethine ylide and indole. In the azomethine ylide model, the electron density was observed while in the indole model, delocalization of bonds was taken into consideration. For the second model, azomethine ylide, single-point energy with Hartee-Fock 3-21G calculations using AM1 semi-empirical equilibrium geometry was also employed. Calculations were again based on the lowest-energy conformer of azomethine ylide, by the AM1 semi-empirical module. Figure 2 below presents the computer-generated model of azomethine ylide. Figure 1: PC Spartan Pro-Generated Structure of an Azomethine Ylide Figure 1 shows a general molecular structure of an azomethine ylide, a neutral molecule with a positive and a negative charge on adjacent atoms. ...read more.

Because of this, azomethine ylide has a dipole moment pointing upward (1.578 D). For the second model, indole, single-point energy with Hartee-Fock 3-21G calculations using AM1 semi-empirical equilibrium geometry was employed. The AM1 semi-empirical module was used to enable the calculations to be based on the lowest-energy conformer of the molecule. Figure 1 below presents the computer-generated model of indole. Figure 3: PC Spartan Pro-Generated Structure of Indole Figure 3 depicts the organic molecule indole as a bicyclic structure consisting of a six-membered benzene ring fused to a five-membered N-containing pyrole ring. The AM1 geometry bond distances in the pyrole ring were investigated by obtaining the bond lengths of the C-C and C-N bonds of indole (in terms of Angstroms). Table 1 below presents the said values: Table 1: C-C and C-N Bond Lengths of Indole Indole Model Bond: Bond Length (�): ...read more.

Moreover, counting the number of electrons in the delocalized p-orbital cloud reveals that there are 10 ?-electrons, following the 4n+2 rule (Huckel rule) for the aromaticity of compounds, which in this case, n=2. All of these verify the aromaticity of indole, since aromatic compounds are known for their delocalized ?-electrons, and this delocalization results to planar geometry. Conclusion: Molecular modeling was employed in this activity to examine specific characteristics of azomethine ylide and indole. For azomethine ylide, electron density was calculated to examine the molecule's observed dipole. By electron density mapping, it was figured out that the electronegative N atom tends to attract electrons of the molecule to it, which in turn causes the observed dipole. For indole, the relatively similar bond lengths imply that the said molecule has a delocalized charge and planar geometry. In both its benzene and pyrole rings, the ?-electrons are delocalized. ...read more.

This is a well-written, clear report. Valid conclusions are drawn, and the student has shown some knowledge of molecular modelling techniques.

In order to gain 5/5, better referencing is needed. In addition, greater discussion on basis sets and techniques would be informative.