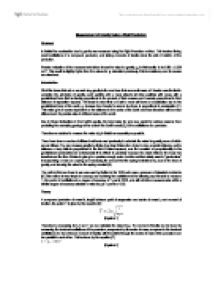 In Bristol the acceleration due to gravity was measured using the Rigid Pendulum method. This involved timing small oscillations of a compound pendulum, and taking moments of inertia about the axis of rotation of the pendulum.

Precise evaluation of the measurements taken shows the value for gravity, g, in this locality to be 9.89 ± 0.038 ms-2. This result is slightly higher than the values for g calculated previously, this inconsistency and its causes are examined.

Of all the forces that act on us each day, gravity is the one force that we are all aware of. Newton was the first to underline the principles of gravity; each particle with a mass attracts all other particles with mass, with a gravitational force that is directly proportional to the product of their masses and inversely proportional to their distance of separation squared. This leads to show that on Earth a mass will have an acceleration due to the gravitational force of the earth, g, because from Newton’s second law force is proportional to acceleration [1]. This value g is of course dependant on the distance to the centre of the Earth and there therefore will be minor differences in its precise value in different areas of the world.

Due to these fluctuations in the Earth’s gravity, the local value for g is very useful for various reasons: from predicting the underlying geology of the rocks in the Earth’s crust [2], to the oscillations of a pendulum.

Therefore we decided to measure the value of g in Bristol as accurately as possible.

There have been a number of different methods used previously to calculate the value for gravity, some of which are as follows. You can measure gravity by timing how long it takes for a body to drop a certain distance, as the distance a body falls is proportional to the time it takes squared, and the constant of proportionality is the gravitational acceleration [3]. Unfortunately it is difficult to precisely measure the exact distance the body has travelled and the time it takes to give g to a precise enough value. Another method widely used in “gravimeters” is suspending a mass on a spring and measuring the amount that the spring is stretched by, due to the force of gravity, and knowing the value for the spring constant [4].

The method that we chose to use was used by Galileo in the 1600s who was a precursor of classical mechanics [5].This method is very simple in concept, and by timing the oscillations in the following way it is able to measure T, the period of oscillations to a degree of accuracy of 1 part in 2000, and with all other measurements within a similar degree of accuracy calculate a value for g to 1 part in a 1000.

A compound pendulum of mass M, length between point of suspension and centre of mass h, and moment of inertia I, the period T is given by the equation [6]:

Therefore by measuring M, h, I and T we can calculate the value for g. The moment of inertia can be found by measuring the torsional oscillations of the pendulum, suspended by its centre of mass, compared to the torsional oscillations of a bar of known moment of inertia; with the axis’s through the centre of mass of the pendulum and bar parallel to each other. This is shown by the equation [7]:

It is important to note the error for each of the terms of the equation, as from the equation you can see that when determining the value for g to a 1 part in 1000 degree of accuracy, T needs to be measured to at least 1 part in 2000, whereas an accuracy of 1 part in 1000 will be adequate enough for M, I and h.

The pendulum was set up as shown:

The pendulum was suspended from its knife edge, making sure that the edge was exactly horizontal, and the oscillations of the pendulum were taken.

For equation 1 to work, we needed to use an amplitude of less than ±20mm to ensure that the error in the approximation of equation 1 was not greater than 1 part in 1000.

The measurements for T were taken using a handheld stopwatch using a fixed reference point below the pendulum to time its oscillations as it passed this.

To measure T accurately to 1 part in 2000, first a series of measurements was taken of 5 periods of the pendulum. From these results an estimate of the error in T was found and to reduce this error we needed to time a larger amount of oscillations.

The constants of M and h were measured. The mass of the pendulum was found by weighing it on a balance calibrated with 1 kg standard weights, therefore giving us an error in its mass of ± 0.0005kg. To find the centre of mass of the pendulum it was balanced on a knife edge, hence the length h could be measured to an accuracy of ±0.5mm.

The period of the pendulum

The period of the pendulum (measured 6 times over 5 periods) when suspended from its knife edge was 1.66 ± 0.0068 s. We then used this estimate to calculate that we needed to time the periods over 300 - 400s to have a sufficient accuracy in our value for the period. We measured an intermediary number of oscillations 3 times, which was worked out to be 36, to get a better estimate of 1.67 ± 0.00094s. Using this better estimate we worked out that we needed to time 180 oscillations of the pendulum, by dividing 300s by our better estimate. The time taken for the 180 swings of the pendulum was 300.66s of which we checked by dividing this by our better estimate to give exactly 180 swings. As the numbers were exact, we are confident that the number of oscillations measured was actually 180 and therefore the time for one period of T was 1.67 ± 0.00019s.

Then combining it with equation 2, of:

We were able to rearrange the equations into a form that we could then calculate our best estimate of acceleration due to gravity, g:

From these equations g was found to be 9.89 ± 0.038 ms-2. The error found in g was calculated by combining the errors in the moment of inertia I, the mass M, the length h, and the time period T of the pendulum.

There are many reasons for this discrepancy. The acceleration due to gravity varies across the world from 9.779 ms-2 in Mexico City to 9.819 ms-2 in Oslo, Norway [11]. This is due to variances in the earths crust and therefore the actual distance to the centre of the Earth. Unfortunately, our measured value still exceeds the extremes of the values across the globe, and Bristol is not known to have a different value for g – the value in London is only 9.812ms-2 [11].

As we cannot contribute the discrepancy to the differences in the Earths crust, we have to examine our experimental method and causes for error that may have been overlooked. Firstly, we are positive that the measurements of the Pendulum’s mass and length could not have any overlooked error in them. Also in determining the period, T, of the pendulum, we were very thorough in our approach to minimise any errors so cannot contribute the discrepancy to an error here.

However, investigating the possible errors in the moment of inertia of the pendulum, there are a few points that could have cause to give a slight discrepancy in its readings, and therefore in the final value for g. Firstly our method for timing the oscillations was not as thorough as our method used to calculate T, hence allowing larger errors to be produced than what was recorded. As we timed 5 torsional oscillations of each of the pendulum and the standard steel bar, the oscillations became slower and did not move quite as far as the first period timed. To eliminate this in further experiments, we could only measure 3 oscillations or reduce the amount that the bar and pendulum are displaced by – but not both as this would increase the human error in stopping starting the stop watch.

If we assume that the moment of inertia of the pendulum was actually correctly measured, there are also some other factors that may have affected the value for g. There is the possibility that the oscillations of the pendulum were too large for the formulae used to derive the formulae in g; the approximations used in the derivation could only be made for small amplitudes. The derivation assumes that sin(x) ≈ x, and the amplitude in our experiment was 20mm. Fortunately, the amplitude used in the experiment shouldn’t cause much of an error from the approximation, as the amplitude was kept to a very small amount.

Another factor that could have resulted in a greater error in the experiment was that the oscillations of the pendulum were not entirely horizontal, and therefore some of its energy was lost due to movements away from the horizontal axis. This would cause the derivation in equation 1 to be incorrect, and hence provide a greater error in g than first was expected.

In evaluating these causes for possible error, we have come to the conclusion that the discrepancy in our value for g was due to the systematic error in calculating the moment of inertia of the pendulum. As well as this, the pendulum not rotating on a horizontal axis may have affected the final value slightly.

Our best estimate in measuring the acceleration due to gravity in the H. H. Wills Physics laboratory, Bristol University, UK is 9.89 ± 0.038 ms-2.

We believe that the difference in this final result and the accepted value for acceleration to gravity of 9.81 ms-2, were due to systematic errors in the experimental procedure, therefore further investigations must be carried out before we can take this value to replace the previously recorded measurements for the acceleration due to gravity.