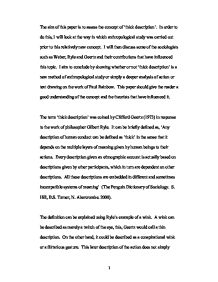 Assess the concept of 'thick description'.

The aim of this paper is to assess the concept of 'thick description'. In order to do this, I will look at the way in which anthropological study was carried out prior to this relatively new concept. I will then discuss some of the sociologists such as Weber, Ryle and Geertz and their contributions that have influenced this topic. I aim to conclude by showing whether or not 'thick description' is a new method of anthropological study or simply a deeper analysis of action or text drawing on the work of Paul Rainbow. This paper should give the reader a good understanding of the concept and the theorists that have influenced it. The term 'thick description' was coined by Clifford Geertz (1973) in response to the work of philosopher Gilbert Ryle. It can be briefly defined as, 'Any description of human conduct can be defined as 'thick' in the sense that it depends on the multiple layers of meaning given by human beings to their actions. Every description given an ethnographic account is actually based on descriptions given by other participants, which in turn are dependent on other descriptions. All these descriptions are embedded in different and sometimes incompatible systems of meaning' (The Penguin Dictionary of Sociology. S. Hill, B.S. Turner, N. Abercrombe. ...read more.

In order to fully understand an action, we must immerse ourselves within the culture that the action takes place. He somewhat famously uses the example of the Balinese calendar. It is remarkably different to the calendars that we may be used to in western society, and in fact would not make a lot of sense to us, but it is of fundamental importance to the agricultural life of the Balinese, as it represents the seasonal changes in terms of the best times to farm. Sue Greenwood in, 'Magic, Witchcraft and the Otherworld' (2000. Oxford, New York) has also discussed this immersion in to a culture in order to study it effectively. She uses the term 'going native' to describe how she fully participated in many of the pagan traditions and rituals in order to fully understand their culture. It is only then that you can understand the reason behind and the meaning of action. Later in his book, Geertz gives the example of sheep stealing in Morocco in 1912 to further illustrate this point. Hollis and Luke discussed his example in 'Rationality and Relativism' (1982). Their main concern appears to be that of perspective. They believe that to fully understand an action or a chain of events you must understand the perspective of those involved. ...read more.

The work of Weber, Dilthey and Shutz appears to be much of the inspiration behind Ryle and Geertz' work and the development of the concept of 'thick description'. The concept of 'thick description' is a relatively new one, although it seems to be fairly well documented. It has been spoken of as if it were a new movement in anthropological study and that Clifford Geertz was its discoverer, I hope that this paper has shown that there were other sociologists that have influenced this area of study such as Weber, Ryle and Saussure to name just a few. It has come under criticism from writers such as the fore mentioned Paul Rainbow, who suggested that it is not a new sociological movement. This however, is not the major issue that I wished to discuss in this paper. My main aim was to assess the concept itself and not to discuss how ground breaking it is. It should appear clear that it has benefited sociological and anthropological study tremendously, as it is a theory that now seems to be a natural process when studying actions. To have a greater understanding of the culture in which an action takes place or in which a text is written is to have a greater understanding of that action or text. ...read more.