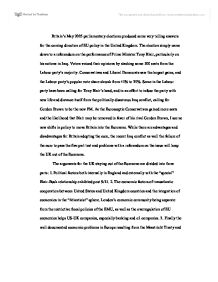 Britain and the Eurozone. Britains May 2005 parliamentary elections produced some very telling answers for the coming direction of EU policy in the United Kingdom.

Britain's May 2005 parliamentary elections produced some very telling answers for the coming direction of EU policy in the United Kingdom. The election simply came down to a referendum on the performance of Prime Minister Tony Blair, particularly on his actions in Iraq. Voters voiced their opinions by slashing some 100 seats from the Labour party's majority. Conservatives and Liberal Democrats saw the largest gains, and the Labour party's popular vote share shrunk from 41% to 35%. Some in the Labour party have been calling for Tony Blair's head, and in an effort to infuse the party with new life and distance itself from the politically disastrous Iraq conflict, calling for Gordon Brown to be the new PM. As the Eurosceptic Conservatives gained more seats and the likelihood that Blair may be removed in favor of his rival Gordon Brown, I see no new shifts in policy to move Britain into the Eurozone. While there are advantages and disadvantages for Britain adopting the euro, the recent Iraq conflict as well the failure of the euro to pass the five part test and problems with a referendum on the issue will keep the UK out of the Eurozone. The arguments for the UK staying out of the Eurozone are divided into three parts: 1. ...read more.

Hutton points out some valid problems in Britain's economy but his rationale in thinking that the answer is adopting the euro is wrong. Britain needs to tailor its economic policy to fit its unique and dynamic economy. The economy of Britain is much more similar to the United States than the rest of the Eurozone, and a move into the Eurozone could result in the same problems that Germany has faced in the last decade. There is no doubt a problems exit in the British economy and government, from a trade deficit caused by its devastated manufacturing sector to governmental problems with the soaring costs of healthcare in a welfare state. This being as it may the UK is better off staying out of the Eurozone and using its liberal fiscal and monetary policies to fix its problems. The current political landscape promotes Britain staying out of the Eurozone, as the Labour party has done little besides rhetoric in its move to become more inline with the "Continent". With Conservatives gaining more seats in the recent election to voice their "Eurosceptic" ideas, and the 2003 report by Chancellor Brown showing that the euro project failed the "five tests", the course promoted by Blair of balancing Britain's role in both UK-EU and UK-US relations will remain the same for some time and Britain will not "take the plunge". ...read more.