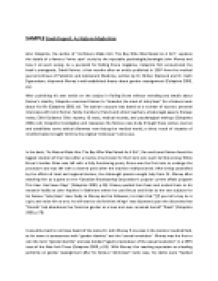 Considering the issues raised by John Colapinto, the author of As Nature Made Him: The Boy Who Was Raised As A Girl,

﻿SAMPLE Book Report: As Nature Made Him John Colapinto, the author of ?As Nature Made Him: The Boy Who Was Raised As A Girl?, explores the details of a famous ?twins case? study by the reputable psychologist/sexologist John Money and how it all went wrong. As a journalist for Rolling Stone magazine, Colapinto first encountered the book?s protagonist, David Reimer, a few months after an article published in 1997 from the medical journal Archives of Pediatrics and Adolescent Medicine, written by Dr. Milton Diamond and Dr. Keith Sigmundson, disproved Money?s well-established theory about gender reassignment (Colapinto 2000, xiv). After publishing his own article on the subject in Rolling Stone without revealing any details about Reimer?s identity, Colapinto convinced Reimer to ?abandon the mask of John/Joan? for a feature book about his life (Calapinto 2000, xv). The author?s account was based on a number of sources: personal interviews with John Reimer, family members, friends and school teachers; private legal papers; therapy notes; Child Guidance Clinic reports; IQ tests; medical records; and psychological workups (Colapinto 2000, xvii). Colapinto investigates and reassesses the famous case study through these various sources and establishes some ethical dilemmas now facing the medical world; a direct result of decades of misinformation brought forth by the original ?John/Joan? twins case. ...read more.

This would provide a better environment for any researcher to balance the ?extraneous variables? that are not controllable in ?case studies?, one of its core disadvantages. (Shaughnessy, 2006 p.334). Case study provide an opportunity ??to try out? new therapeutic techniques?, which intrigued Money almost as much as the idea of challenging the scientific theory of ?nature over nurture? (Shaughnessy, 2006 p.329). The evidence of case studies could also provide ?tentative support? for his proposed theory of ?nurture over nature? (Shaughnessy, 2006 p.329). This situation would be attractive to a host of researchers and Money?s ego was more than eager to ?take the bait?. The problem is that Money claimed success too soon; going on National book tours with appearances on such shows as Oprah to promote a premature idea that was ultimately proved as inconclusive. The topic of ?intersexuality? is depicted in this book, as the findings of the ?John/Joan? became the ??index case? for treatment of intersexuality in infants? (http://pdfserve.galegroup.com/pdfserve/get_item/1/Sb88a90w16_1/SB096_01.pdf). ??Intersex? is a general term for any form of congenital (inborn) mixed sex anatomy? and although Bruce Reimer wouldn?t technically qualify as ?intersexed? because his sex anatomy was destroyed after birth, the same ?gender-reassignment? treatment was applied to patients in either case until fairly recently (Melba 2002, p.6). ...read more.

Reimer was treated worse than a person born with male and female sex organs because he was assigned a gender identity that was opposite his known biological sex. At least with intersex patients their true sex is not able to be determined, this leaves a wider and more guilt-free option to choose either sex equally. Experiencing pain beyond the IRB definition of ?minimal risk?, David experienced great mental and emotional stress, ?a potential risk of psychological research? that should have been assessed by Dr. Money before the research was conducted (Shaughnessy 2006, p.65). Even with the support of his wife and children David was never fully able to conquer his fear and shame, and took his life shortly after sharing his raw experience with the reader. In the Book ?As Nature Made Him: The Boy Who Was Raised As A Girl?, Colapinto was able to use the various sources at his disposal to create a better understanding of various issues regarding ethics in medicine while generating awareness about issues such as ?intersexuality? in our society in efforts to help fracture negative stereotypes about the condition and the people that are affected by it. ...read more.