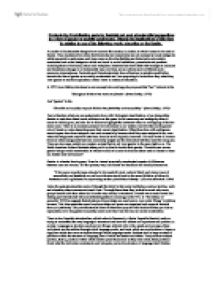 Evaluate the Contribution made by feminist and post-structuralist perspectives to a view of gender as socially constructed. Discuss the implications of this view in relation to one of the following: work, education or the family.

Evaluate the Contribution made by feminist and post-structuralist perspectives to a view of gender as socially constructed. Discuss the implications of this view in relation to one of the following: work, education or the family. A number of fundamental changes have occurred this century in relation to what it means to be male or female. They emphasize the notion that femininity and masculinity are not necessarily innate categorise which pre-exist in each person and focus more on the idea that they are historically and socially constructed and united categories which are found in social institutions, procedures and practises including those of the home, school and workplace. Research has shown that what emerges as maleness and femaleness changes in a fundamental way over time, across cultures and in different socio-economic circumstances. Feminists and Post-structuralists have offered an invaluable contribution towards the idea of gender as a socially constructed and I am proposing to look at how they what they view gender as and the implication of their views in relation to education. In 1972 Anne Oakley introduced a new concept into sociology she proposed that "s*x " referred to the "Biological division into male and female" (Anne Oakley: 1972) And "gender" to the "Parallel and socially unequal division into femininity and masculinity" (Anne Oakley: 1972) s*x is therefore what you are anatomically born with. Biological classifications of s*x being either female or male have faced much criticism over the years for its inaccuracy and ambiguity when it comes to defining s*x, and also for its failure to highlight the instances when an overlapping of the two sexes occur. There is an immense pressure for individuals in our western world to take on the gender role of female or male depending upon their s****l classification. ...read more.

Radical feminists maintain that the differences between men and women are mostly the result of socialization in male-dominated societies, and that it is patriarchal oppression that has relegated women to feminine gender roles. Feminists often see the family as being at the root of this oppression. Hegemonic masculinity furthers the problem of inequality faced by females here men maintain a higher power than women through social inequalities institutions and power relations which they have the central most important role in, and ensure they remain in this role by supporting one another in achieving this. Biology is said to have little to do with abilities or s*x roles in our society. Some feminist writers actually believe that the idea of "two sexes" male and female is a myth. Dr. Anne Fausto- Sterling, " says that western culture is defying nature by maintaining a "Two-party s****l system, for biologically speaking, there are many gradations running from female to male; and depending on how one calls the shots, one can argue that along the spectrum lie at least five sexes-and perhaps even more." (Anne Fausto-Sterling:) Feminists believe that to be born a man or a woman in any society is more than a simple biological fact. It is a biological fact with social implications. We receive messages from the day we are born about what is appropriate for a male and a female. Cards celebrating the birth of a baby often reflect desirable gender stereotypes - pink, bows and bracelets for a baby girl, puppies, b***s and scraped knees for a boy. Advertising, toys, clothing and popular media additionally re-iterate notions of what is right for girls and women and what is right for men and boys Women constitute an individual social group, and the character of that group, has nothing to do with feminine nature. ...read more.

By highlighting the concepts of gender patriarchy and s*x roles they have developed theories upon why gender inequality occurs. By gaining the opportunity to publish why girls are treated differently in schooling they are enabling society to recognise this and act upon it. To some extent this is working as girls are and have been for some time rising above boys in academic achievement. Girls are also encouraged to participate in more activities that perhaps have not been viewed as girl's subjects such as engineering wood and metal technology and particularly sports that traditionally involved only men. Employment opportunities have increased for women thanks to part time work and all this has actually caused an alteration in the way girls think. In Sue Sharpe's research in the 1990s she found that girls no longer attached a great importance to marriage and family but placed more emphasis upon work and being self-sufficient. So already feminist have managed to alter the social construction of gender through written and verbal education. The problem however still comes back to gender being a social construction. Feminist and post-structuralist I feel have successfully shown that gender is something that we are not merely born with it is something we learn from the day we are born. Sadly this means it is an ongoing vicious circle that is very tricky to overcome as all generations learn through social construction how to bring up a boy or a girl and how to distinguish between the two when they are born through relying on the social construction of s*x. There is an immense fear attached to those who deviate from the norm of gender so often we are prevented from doing anything that may be see as not a social norm in respect to our gender roles. ...read more.