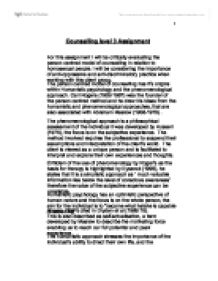 Critically evaluate the person centred model of counselling in relation to homosexual people.

Counselling level 3 Assignment For this assignment I will be critically evaluating the person centred model of counselling in relation to homosexual people. I will be considering the importance of anti-oppressive and anti-discriminatory practice when working with this client group. The person centred model of counselling has it's origins within Humanistic psychology and the phenomenological approach. Carl Rogers (1902-1987) was the founder of the person centred method and he drew his ideas from the humanistic and phenomenological approaches, that are also associated with Abraham Maslow (1908-1970) . The phenomenological approach is a philosophical assessment of the individual it was developed by Husserl (1975), the focus is on the subjective experience. The method involved requires the professional to suspend their assumptions and interpretation of the client's world. The client is viewed as a unique person and is facilitated to interpret and explore their own experiences and thoughts. Criticism of the use of phenomenology by Roger's as the basis for therapy is highlighted by Eysenck (1998), he states that it is a simplistic approach as ' much valuable information lies below the level of conscious awareness' therefore the value of the subjective experience can be unreliable. Humanistic psychology has an optimistic perspective of human nature and the focus is on the whole person, the aim for the individual is to "become what he/she is capable of becoming" Rogers (1951) cited in Dryden et al (1989:10). This is also described as self-actualisation, a term developed by Maslow to describe the motivating force enabling us to reach our full potential and peak experience. ...read more.

In 1974 the American Psychiatric Association declassified it, Mcleod J, (1998), and although it is no longer considered a mental illness, it can be argued that it is still considered as a deviation from the 'norm' (Davies and Neal, 1996) Rogers deliberately used the word 'client' to replace 'patient' because he believed that the client was an 'expert' on his or her problem, this is significant in relation to therapy for gay and lesbian people. However it can be argued whether the balance of power has actually shifted towards the recipient from the professional/counsellor. The issues of ethnicity, culture, race and class are particularly important when there is a difference between the counsellor and the client's cultural background; for example if the client is black and the counsellor is white, it can be questioned whether cross cultural counselling will be effective? Another important question is that of racism, can a white middle class, heterosexual counsellor, fully understand the impact of racism and on a black gay/lesbian person? Palmer et al (1996:184) define the 'imbalance of power' that a black person may already have experienced in daily life situations and therefore may distrust the professional-client relationship as it may be a 'mirror-image' of powerlessness they experience in every day situations. Neal and Davies(2000) also stress the 'multiple' discrimination experienced by black people, when the client is black and gay Neal and Davies state they have to come to terms with " the additional task of integrating two major aspects of their identity which are generally devalued by society, race and sexuality" (2000:14). ...read more.

They also emphasise the need for training counsellors to be aware of issues such as homophobia, gay identity development and reflecting their own values towards homosexuality. The person centred model has contributed significantly to the therapeutic process of counselling and working with gay and lesbian people, Kus, (1990), highlights the importance of honesty and openness about personal prejudices on behalf of the therapist and that clients should be referred on, in such circumstances. The person centred model is also useful for other helping professionals from health, social work and education, because it places the individuals needs and experience at the focus of the relationship and it is therefore a useful tool in facilitating the acceptance, respect and valuing relationship between client and counsellor, which will therefore facilitate change and growth. Reference Page Perry J, counselling for women(1993) Open University press, Buckingham Hough M(2002) A Practical Approach To Counselling, 2nd edition,Pearson Education Ltd Essex. Neal C and Davies D (2000) Issues in Therapy with lesbian, gay, bisexual and transgender clients , Open University Press Buckingham Pietrofesa JJ et al (1978) Couselling :Theory, Research and Practice Rand McNally College Publishing Company,Chicago, USA Davies D, Neal C, (1996) Pink Therapy, Open university press, Buckingham Palmer S,(1989) The Hand Book of Counselling, Tavistock, Routledge, London Kuss J R,(1990) Keys To Caring ,Assisting Your Gay And Lesbian Clients, Alyson Publications London Palmer, S and Laungani P et al (1999) Counselling in a multicultural society, Sage publications Ltd London Dryden et al (1993) Handbook of Counselling in Britain, Routledge , London Chan C (1997) Asian Lesbians : psychological issues in the coming out process, Thousand Oaks Sage , London 1 ...read more.