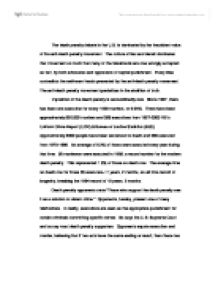 The death penalty debate in the U.S. is dominated by the fraudulent voice of the anti-death penalty movement. The culture of lies and deceit dominates that movement so much that many of the falsehoods are now wrongly accepted as fact, by both advocates and opponents of capital punishment. Every idea contradicts the well-worn frauds presented by the anti-death penalty movement. The anti-death penalty movement specializes in the abolition of truth. Imposition of the death penalty is extraordinarily rare. Since 1967, there has been one execution for every 1600 murders, or 0.06%. There have been approximately 560,000 murders and 358 executions from 1967-2000 FBI's Uniform Crime Report (UCR) & Bureau of Justice Statistics (BJS). Approximately 5900 people have been sentenced to death and 358 executed from 1973-1996. An average of 0.2% of those were executed every year during that time. 56 murderers were executed in 1995, a record number for the modern death penalty. ...read more.

How absurd. Opponents' flawed logic and moral confusion mirror their "factual" arguments--there is, often, an absence of reality. The moral confusion of some opponents is astounding. Some equate the American death penalty with the Nazi holocaust. Opponents see no moral distinction between the slaughter of 12 million totally innocent men, women, and children and the just execution of society's worst human rights violators. The author, David Sharp, believes the incapacitation effect saves lives--that is, that by executing murderers you prevent them from murdering again and do, thereby, save innocent life. The evidence of this is conclusive and unquestionable. Furthermore, he says that the individual deterrent effect also proves that executions save innocent life. This effect represents those potential murderers who did not murder under specific circumstances because of their fear of execution. He claimed that there are many, perhaps thousands, of such documented cases, representing many innocent lives saved by the fear of execution. ...read more.