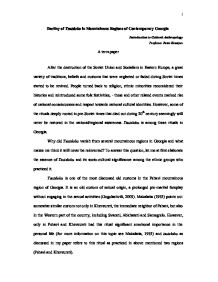 Destiny of Tsatsloba in Mountainous Regions of Contemporary Georgia.

Destiny of Tsatsloba in Mountainous Regions of Contemporary Georgia Introduction to Cultural Anthropology Professor Peter Krasztev A term paper After the destruction of the Soviet Union and Socialism in Eastern Europe, a great variety of traditions, beliefs and customs that were neglected or faded during Soviet times started to be revived. People turned back to religion, ethnic minorities reconsidered their histories and reintroduced some folk festivities, - these and other related events marked rise of national consciousness and respect towards national cultural identities. However, some of the rituals deeply rooted in pre-Soviet times that died out during 20th century seemingly will never be restored in the national/regional awareness. Tsatsloba is among these rituals in Georgia. Why did Tsatsloba vanish from several mountainous regions in Georgia and what makes me think it will never be reinvented? To answer this question, let me at first elaborate the essence of Tsatsloba and its socio-cultural significance among the ethnic groups who practiced it. Tsatsloba is one of the most discussed old customs in the Pshavi mountainous region of Georgia. It is an old custom of sexual origin, a prolonged pre-marital foreplay without engaging in the sexual activities (Gogolashvili, 2003). Makalatia (1935) points out somewhat similar custom not only in Khevsureti, the immediate neighbor of Pshavi, but also in the Western part of the country, including Svaneti, Abkhazeti and Samegrelo. However, only in Pshavi and Khevsureti had this ritual significant emotional importance in the personal life (for more information on this topic see Makalatia, 1935) and tsatsloba as discussed in my paper refers to this ritual as practiced in above mentioned two regions (Pshavi and Khevsureti). Famous Georgian writer and public figure from late 19th century Vaja Pshavela (1964, p.353) describes the phenomenon of tsatsloba as a platonic relationship containing solely mental, emotional ties rather than physical relationship: "Tsatsloba happens between an unmarried young woman and unmarried young man, a stranger and a stranger, a relative and a relative, a married man and a married woman. ...read more.

Accelerated changes in social life and global culture started to take place in the country and particularly in its economic, political and cultural center, situated in the lowlands, and together with this the highland regions faced an unbalanced and distorted confrontation with the modern changes in public life, especially with the invention of television and consequent doses of global mass culture that television (along with other types of mass media: newspapers and magazines) started to spread out indiscriminately. Thus, the applicability of modern concepts of general social standards and norms to those of the highlanders, and vice versa, became the major issue of concern of the society, because while comparing the state of ethnic culture to the general picture of modern life even in the neighborhood of the region where this culture exists, the first important issue is the controversy between the old attitude and vision of life and ways of the contemporary lifestyle (Gogolashvili, 2003). Here we encounter one of the brands of diffusionism which emphasize different cultural mechanisms of transmission. This variant stresses "infiltration or migration into adjacent lands as the main means by which groups of superior cultural potential spread objects and ideas among their neighbors" (Wolf, 1997, p.124). which is well-known phenomena in Anthropology. Bardavelidze (1974, 1982) rightly points out that for many decades after the Second World War the mountainous regions of Georgia were practically neglected with respect to financial support for their economic and cultural needs. The help they received (building roads and electric stations during Soviet period) was initiated by the more serious requirements and reasons of the "Soviet republican importance". As for immediate cultural needs of them, the direct attention received would be either spontaneous or superficial and limited to occasional local celebrations and festivals (Gogolashvili, 2003). Scarcely anything was done to facilitate everyday life chores and the personal/spiritual needs of the people. As a result, the tendency to leave highlands, their traditional areas, and to migrate to lowland, which could offer far more means for every aspect of life, was initiated soon after Second World War. ...read more.

To my understanding, these are but a few reasons why I think this formerly deeply rooted tradition tsatsloba will not be reinvented again in contemporary highlands of Eastern Georgia. However, as Geertz (1973) argues in his The Interpretation of Cultures, cultural analysis is intrinsically incomplete. The more deeply it goes, the less complete it is. It is like that Indian story about the world rested on a platform which rests on the back of an elephant which rests on the back of a turtle, and it is turtles all the way down (Geertz, 1973, p.28). To my understanding, the credibility of cultural analysis, in search of all-too-deep-lying turtles, is quite suspicious especially when the issue discussed is an old and outlived tradition such as tsatsloba. Nevertheless, I attempted to look at this tradition from the lenses of modernity to understand what has blocked its viability in nowadays world full of re-invented national characteristics and identities. To conclude, it should be noted that some culturally determined traditions and customs lasted for many centuries (for example, many scholars believe that tsatsloba had deep roots in pre-Christian period), because the ethnic mentality of a particular society was determined by the centuries of estrangement induced this society's geographical and climate factors. Besides, difficulties in many aspects of everyday life and ethics would facilitate invention and establishment of such customs. But that is not the case in the modern Caucasus anymore. As Giddens (1995) rightly pointed out, tradition is not static, because it has to be reinvented by each new generation as it takes over its cultural inheritance from those preceding it. It means that tradition is located not only in space but also in time. Current Georgia is rapidly advancing contemporary country where no geographical unit enjoys seclusion so characteristic just a century ago. Let me just hope that some other "traditions" deeply embedded in the societal conscience (such as bribery and laziness, these two evils widely spread during communism) will vanish completely as tsatsloba and other culturally determined, formerly deeply rooted and now meaningless customs did. ...read more.