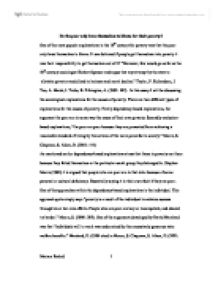 Do the poor only have themselves to blame for their poverty?

Do the poor only have themselves to blame for their poverty? One of the most popular explanations in the 19th century for poverty was that the poor only have themselves to blame. It was believed if people got themselves into poverty it was their responsibility to get themselves out of it? "However, few would go as far as the 19th century sociologist Herbert Spencer and argue that any attempt by the state to alleviate poverty would lead to laziness and moral decline." Taylor, P. Richardson, J. Yeo, A. Marsh, I. Trobe, K. Pilkington, A. (1995: 182) In this essay I will be discussing the sociological explanations for the causes of poverty. There are two different types of explanations for the causes of poverty. Firstly dependency-based explanations, the argument the poor are in some way the cause of their own poverty. Secondly exclusion- based explanations, "the poor are poor because they are prevented from achieving a reasonable standard of living by the actions of the more powerful in society." Moore, S. Chapman, S. Aiken, D. (2001: 141) As mentioned earlier dependency-based explanations stress that those in poverty are there because they failed themselves or the particular social group they belonged to. Stephen Moore (1996) it is argued that people who are poor are in that state because of some personal or cultural deficiency. ...read more.

Chapman, S. Aiken, D. (2001) This argument suggests that people are not poor because of their deficiency but because they themselves are setting themselves values that are stopping them from breaking out of poverty. These values lead the poor to except their fate of poverty rather then trying to improve their lives. Lewis argues that once established, the culture of poverty "tends to perpetuate itself from generation to generation because of its effect on children. By the time slum children are age six or seven, they have usually absorbed the basic values and attitudes of their subculture and are not geared to take advantage of increased opportunities which may occur in their lifetime." O, Lewis. (1966 cited in M, Haralambos and M, Holborn 1995: 150) The final approach within the dependency-based explanations is the underclass. This approach is a more subtle development of the individual explanation. It suggests that there is a distant 'underclass' that exists of people who are lazy and make no effort to work or look after themselves. Moore, S (1996) This explanation shows how some people prefer to live off the state rather than having to work for their money. The underclass only refers to those who make no effort to help themselves, however we must accept that there are poor people who are in this state through no fault of their own. ...read more.

Moore, S. Chapman, S. Aiken, D. (2001: 142) and finally the poor providing a stating point "against which others can measure their own income rather then that of the ruling class Moore, S. Chapman, S. Aiken, D. (2001) Although this explanation suggests the poor are not to blame for their poverty like the dyswelfare view it still contrasts with the dyswelfare view because it says poverty is the result of the direct outcome of modern society. To conclude there is a huge debate over the causes of poverty and who is to blame. As mentioned earlier it is shown that some people are more in danger of being in poverty than others. Especially those individuals who are excluded from the labour market by such things as old age, disability etc. Most sociologists argue that the causes of poverty are to be found in the structure of society rather then the behavior of individuals. Taylor, P. Richardson, J. Yeo, A. Marsh, I. Trobe, K. Pilkington, A. (1995) However on the other hand the evidence above suggests that the individuals are to blame for their own poverty. Overall most evidence suggests that the welfare state plays a big in part in this and there is much evidence to suggest the welfare state does little to reduce economic inequality in society. Finally we must also consider other factors which are involved such as how poverty is actually defined and measured. ...read more.