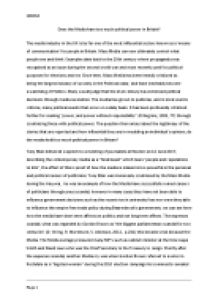 Does the Media have too much political power in Britain?

﻿186064 Does the Media have too much political power in Britain? The media industry in the UK is by far one of the most influential sectors known as a 'means of communication' for people in Britain. Mass Media can now ultimately control what people see and think. Examples date back to the 20th century where propaganda was recognised as an issue during the second world war and most recently used for political purposes for elections and ect. Since then, Mass Media has been heavily criticized as being the largest industry of scrutiny in the Political radar, and have inevitably become a watchdog of Politics. Many would judge that the 21st century has victimised political decisions through media revolution. The media has grown to publicise, and in most events criticise, many political events that occur on a daily basis. It has been profoundly criticized further for seeking "power, and power without responsibility" (R.Negrine, 1989, 77) through scrutinizing those with political power. The question then arises about the legitimacy of the stories that are reported and how influential they are in moulding an individual's opinion; do the media hold too much political power in Britain? Tony Blair delivered a speech to a meeting of journalists at Reuters on 12 June 2007, describing the contemporary media as a "feral beast" which tears "people and reputations to bits", the effect of this is proof of how the media is indeed is too powerful in the personal and political careers of politicians. ...read more.

The central point is that by controlling the moving pictures of dissent, governments believe that they can not only minimize the dissent itself but also completely remove the major source of criticism" (R. Negrine, 1989, p.11), through controlling or restricting the Media democracy is also threatened s a clear picture is not presented', nor is the media painting a good image of politics, especially "those without power or legitimacy lack the resources necessary to capture the Mass Media. The planning and organization required to lead the Mass M edia and so define the 'real' issues and their meaning are outside the scope of "powerless" individuals. Members of the general public usually only respond and react to Media content: they are rarely in control of media work. In such was political actors, aided and abetted by the mass media, help construct images of reality" (R.Negrine 1989, p.13), this point shows that the political use of Media is confined to only those in a position of power and it is not democratic, what we must understand is that what the media impose in distribution could be either a way to distort the conscious or simply for stories in order to make profit and what can be believable. Following this, the Media have always been limited in their powers till this day. ...read more.

It is credible to say that the media was more influential decades ago then it is now. The Media was more partisan and patron to politics back then due to factors such as careers in journalism within parliament. Politics is now a full time career for many MP's, therefore this shows how MP's careers are focused around building a career based on popularity. However, provided the politicians eagerness to please the media, It is also important to note that "just because the parties seek to body-swerve past the media as they seek to communicate directly with voters, this does not mean that the media can therefore be discounted when analysing the effectiveness of political marketing strategies and tactics" (Savigny and Temple, 2010, p.271-2), we can see here how the Media are never to powerful over politics, simply because a scandal and story may be a headline for a week, however it will eventually become old news, people will forget, and there will be a new day with a new headline. The Media will always be a corporation, it is a profit seeking business and to end with, "the final political decision rests with the people" (M. Cockerell , P. Hennessy, D. Walker, 1984, p.144). The Media does not have too much political power, simply because the government have ultimate power in dictating the Media. ...read more.