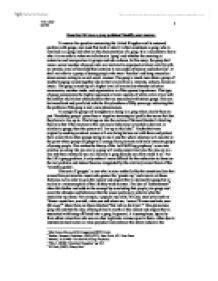 Does the UK have a gang problem? Justify your answer.

Does the UK have a gang problem? Justify your answer. To answer the question concerning the United Kingdom and its assumed problem with gangs, one must first look at what it is that constitutes a gang; who is involved in a gang; and what are the characteristics of a gang. It is a necessity to know who it is we refer to when we talk about a 'gang' and whether the meaning is extensive and incorporates all groups and sub-cultures. In this essay, the gang shall mean a select number of people who are involved in organised criminal activity with an intrinsic level of hierarchy that contains it own codes of honour and behaviour1. It shall not refer to a group of young people who wear 'hoodies' and hang around on street corners acting in an anti-social manner. The gang is much more then a group of youths hanging around together due to their similarities in interests, schools, homes or music. The gang is made up of a higher level of criminality whereby initiation ceremonies, member ranks, and organisation is of the upmost importance. This type of gang incorporates the highly organised criminal aspects of white collar crime with the conflict and violent characteristics that are associated with street gangs. This can be traced back and paralleled with the Kray brothers of fifty years ago indicating that the problem of the gang is not a new phenomenon. To categorise groups of youngsters as being in a gang when clearly they are just 'friendship groups' gives them a negative stereotypical profile that some feel that they have to live up to. This brings us into the realms of Howard Becker's labelling theory in that if the reaction to this anti-social behaviour is treated as deviant, in relation to gangs, then the person will live up to this label2. ...read more.

So could the UK problem ever get to the same extent as the US?. We have gangs that control territories using violence in order to maximise their profits from the drugs trade, members that carry knives is customary and those that carry guns are the start of the norm. Furthermore, ASBO's are badges of honour for the younger generation and prison sentences are even more revered and respected. It parallels with LA's infamous South Central district in the early 1980's, "right about the time that the gang problem exploded onto the streets to be followed by three decades of bloodshed."10 Seemingly, the gang problem in the UK is becoming more of an epidemic as children are afraid to walk to school for fear of walking across a gang territory. In complete contrast, it can be argued that this fear of the gang and the violence it portrays is completely unjustified. There is very little criminological research on gangs in the UK. In particular, there is a severe lack of knowledge that deciphers any difference between gang members and non-gang members from similar social backgrounds. This apparent lack of empirical data allows for people to create and elaborate on their own fears and unwarranted opinions. There is no established gang research tradition in the UK11 and attempts to apply American gang theory to the UK resulted in the discovery of street corner societies as mentioned earlier. The lack of definition to what constitutes a gang means that these groups of youths can not be analysed in the gang context. The police consider a gang to be a "group of professional criminals involved in extortion, drug dealing, robbery and dealing stolen or counterfeit goods"12. ...read more.

The gang still moves hidden under a smokescreen, "Gangs don't hang around street corners where you can see them - they're much more sophisticated that that"24, their full extent can never be recognised and this is what makes them a problem for the UK. In conclusion, these is some evidence from national newspapers and government reports that the number of gangs and gang members in the UK is increasing, with reports of street gangs involved in serious violent offences and interviews with young children confirming that they know how to obtain a gun. However, this is quite a stereotypical image which alerts us to the fact that there is a severe lack of criminological research on gangs within the UK. The US research should not be used to analyse the UK context as the two are very different. Labelling groups of youths as gangs also aids in escalating the problem of the gang as they are being pushed towards a life of crime by becoming resentful towards the society that labels them anti-social and therefore a gang. Shadow Home Secretary says the label does not matter, "The public are not bothered about what people who commit crime and anti-social behaviour are called."25 But something must be done to counter the appeal of gang culture in the UK. However, if the only role model available to children in deprived areas is the local drug dealer with the luxurious car and money flowing from his pockets then the gang problem will continue to worsen as legitimate means of succeeding will become redundant. Finally, I believe that the UK does have a gang problem that possibly only those in the areas where gangs reside can possibly know the full extent of the terror that this brings. ...read more.