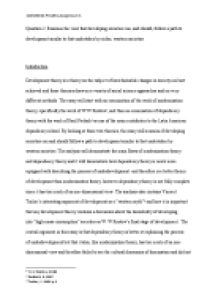 Examine the view that developing societies can, and should, follow a path to development similar to that undertaken by richer, western societies.

I would argue the same to some extent, however I do believe that a general theory of development can serve a good purpose, although developing societies cannot simply imitate western societies since they have a completely different background and a development theory must acknowledge societies different history and look to both external and internal factors. A general theory that acknowledges these factors can serve as an ?inspiration? for development but not as a development plan that has to be followed precisely. Cardoso offers a strong criticism of modernization theory where he attacks the concept?from traditional to modern? society, he argues that neither concept is broad enough or specific enough to characterize and examine the different structures that determine the lifestyles of societies. These kinds of concept also overlook various stages of economic development that are not characterized as either traditional or modern[11]. Modernization theory tends to simplify the process of development and believes that if undeveloped countries simply follow the step of the richer western countries; they will also develop and reach the final stage of ?high-mass consumption?, although there is no society that has ever followed Rostow?s five stages to growth exactly. It looks at symptoms of undevelopment rather than the reasons for lack of it and therefore does not see that an universal theory of development does not work since undeveloped countries have a different starting point than what western countries had and that undeveloped countries look very different from each other, there is no single treatment that will cure them all from their undevelopment. ...read more.

Modernization theory?s main criticism was that it thought that ?one model would fit them all? and that it looked at the symptoms of underdevelopment and not the reasons[18]. Modernization theory had a very one-dimensional view of development but so had the competing theory, dependency theory, as well. It mainly looked to external factors such as the uneven structure of the world economy, and failed to address the cultural dimensions of domination. What this essay has tried to prove is that both modernization theory and dependency theory are not alone adequate to explain underdevelopment/undevelopment and the process of development, however if the two theories work together they can create a much more valuable and helpful theory of development. A lot of time has been spent on explaining and evaluating on the two theories of development although another very important aspect of development is the desirability of becoming like western richer societies and to reach Rostow?s final stage of a ?high-mass consumption? society and what that would mean for the world and the environment. Developed countries have to understand that we have a lot to learn about lifestyle, values and culture from the underdeveloped countries and the world has to recognize that if the underdeveloped countries reach our level of consumption the world will face terrible environmental problems. However, we shall not deny underdeveloped countries their development process, we in the western world must help the countries in need and it is important that we as individual think over our decision of living as high-mass consumers and its consequences. ...read more.