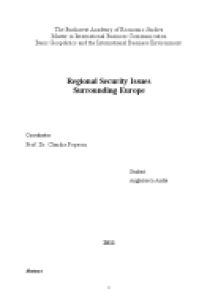 ﻿The Bucharest Academy of Economic Studies Master in International Business Communication Basic Geopolitics and the International Business Environment Regional Security Issues Surrounding Europe Coordinator: Prof. Dr. Claudia Popescu Student: Anghelescu Andra 2011 Abstract The European neighbourhood, harshly geographically definable, has in common the more or less stable conflicts. The European Union divides this neighbourhood in three parts: Euromed (Morocco, Algeria, Tunisia, Libya, Egypt, Palestinian Authority, Israel, Lebanon and Syria, included in the Process of Barcelona), Eastern Europe and Caucasus (Belarus, Ukraine, Moldova, Azerbaijan, Armenia, and Georgia) and Russia. The two first zones are included in the European Neighbourhood Policy (ENP), and the last one has a special policy EU-Russia Strategic Partnership based on four common spaces. The different means of action of the ENP is financial tools used in bilateral action plans including political and economical reform. In order to understand what could be a more efficient relation between the EU and its neighbours, we should define the geopolitical systems, then to track back the background of the conflicts, then to analyse the current features relative to the different systems, and then to see what could bring the development of a regional-based European Neighbourhood Policy. Introduction Six geopolitical systems can be defined on the basis of geopolitical realities, and even if it is restrictive while countries and systems are connected in a more complete way: 1. System MAT (Morocco, Algeria, Tunisia) 2. System LAW (Libya and Arab World) 3. System EJIPT (Egypt, Jordan, Israel, Palestinian Territories) 4. System ILS (Israel, Lebanon, Syria) 5. System AGA (Armenia, Georgia, Azerbaijan) 6. System BUM (Belarus, Ukraine, Moldova) 1. Historical backgrounds of the European Neighbourhood Systems (ENS) The European surrounding is not only close to Europe in a geographical way, but also in culture, values, religion, politics and all the fields that can define the strategic orientations of a political entity. In a single word, we share a common history. ...read more.

Morocco is certainly the closest country of Europe in the European Neighbourhood Policy. Algeria has a very particular relationship to Europe. Its first commercial partner is the United States, and if the country is dependent of Europe, its relations to France are currently blocking a bit the advancement of advanced EU-Algeria partnership. Tunisia has a quite good relationship to Europe but there are issues related to democracy and press. The LAW system is an internal-external European neighbourhood system. If Libyan relationships to other Arab states have never been at the point to concretize politically by a federation, the Libyan leader backed Arab nationalism, nasserism, palestinian cause, and independence from the western powers by a broad range of means. Today, with the turnover of Libya toward the west, it is still linked to Arab world by few issues: 1. Stability of the central Maghreb, between the MAT and EJIPT systems 2. The implication of Libya in the Israeli-Palestinian and conflict and the US Iraqi strategy[1] 3. Libya represents approximatively 5% of the production and capacity of oil of the Organization of the Petroleum Exporting Countries (OPEC) 4. The so-called ?Libya Model? can be seen as an example of goodwill for the improvement of western and some Arab or Muslim states. Of course, even if the ?Libya Model? is claimed to be a success, the country is not as close to the European Union as Morocco, for instance. The Arab states are probably satisfied as well to see Libya improving its foreign relations. But some risks remain regarding to this particular actor of the European neighbourhood: 1. The freedom of expression and the democratical process are still limited in a neighbourhood that the EU would like rightful and democratic. 2. If the process of normalization is more than engaged, the relationship to the Arab states has not been redefined at a comparable scale, point which can be seen as antagonism between the backing of Arab nationalism and the will of cooperation with the Europeans. ...read more.

6. The more or less advanced partnership with NATO creates tensions with the Russian Federation. Regarding to BUM external relations, three main actors can be listed: Russia, the US and the EU. Considering Russia, it is certain that the loose of influence on the ex-USSR territory represented a difficulty for the Eurasian giant. The Eastern European part represents of course a privileged area of action for Moscow, while more than the languages, it has a lot of interests in this huge geopolitical area bordering the European Union and tempted by NATO. The EU tries to implement a real dialogue with the three countries even if it is hard regarding to each countries difficulties and of bilateral dispute like the Polish-Belarusian one and regarding too to it hard relation to Russia which dislike the investigation of the EU in its former controlled area. The US try to content more or less Russia in expanding their field of partners to ex-USSR actors, a strategy which works differently following the countries but that is, even in principle already active, and therefore active. Conclusions It is clear that the European neighbourhood is full of dysfunctions. Of course the European Union in itself is not empty of, but its regional enhanced cooperation nature and its principles and aims diverge deeply of some features which have been seen here. The question is therefore, while the European Union does not wish to conciliate its principles with the harsh conditions of some neighbouring states, how to converge with them toward a more secured neighbourhood. The number of issues related directly to security matters is numerous. More numerous even are the number of countries sharing these troubles. Solving problems in neighbouring countries is more than necessary, it is imperative. It shows also that while these troubles are common to countries and/or shared by them, a regional analysis and strategy is justified. This could help to allow the European neighbours to share and to develop the greatest chance of the European Union: peace and stability. ...read more.