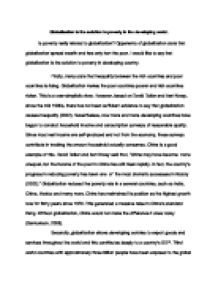 Globalisation is the solution to poverty in the developing world. Discuss

Without globalization, China would not make the difference it does today (Samuelson, 2008). Secondly, globalization allows developing contries to export goods and services throughout the world and this contributes deeply to a country's GDP. Third world countries with approximately three billion people have been exposed to the global market of manufacturing and services. Twenty years ago, most exports from developing countries were primarily commodities but now they are predominately providing manufactured goods and services. This successful integration has directly supported poverty reduction. This fact has proved that globalization made a big impact on poor countries and helped in poverty reduction Collier, P, Dollar, D. & World, B. ...read more.