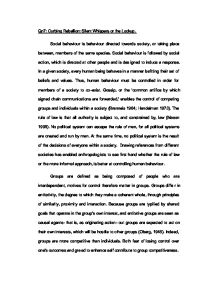 Gossip or The Rule of Law?

Social behaviour is behaviour directed towards society, or taking place between, members of the same species. Social behaviour is followed by social action, which is directed at other people and is designed to induce a response. In a given society, every human being behaves in a manner befitting their set of beliefs and values. Thus, human behaviour must be controlled in order for members of a society to co-exist. Gossip, or the ‘common artifice by which signed chain communications are forwarded,’ enables the control of competing groups and individuals within a society (Brenneis 1984; Handelman 1973). The rule of law is that all authority is subject to, and constrained by, law (Mason 1995). No political system can escape the rule of men, for all political systems are created and run by men. At the same time, no political system is the result of the decisions of everyone within a society.  Drawing references from different societies has enabled anthropologists to see first hand whether the rule of law      or the more informal approach, is better at controlling human behaviour.

Groups are defined as being composed of people who are interdependent, motives for control therefore matter in groups. Groups differ in entitativity, the degree to which they make a coherent whole, through principles of similarity, proximity and interaction. Because groups are typified by shared goals that operate in the group’s own interest, and entitative groups are seen as causal agents- that is, as originating action- out groups are expected to act on their own interests, which will be hostile to other groups (Oberg, 1948). Indeed, groups are more competitive than individuals. Both fear of losing control over one’s outcomes and greed to enhance self contribute to group competitiveness.

Group members conflict over controlling resources. In social dilemmas, individual self-interest conflicts with collective interest, creating mixed motives. In a commons dilemma, the conflict occurs over taking resources from a common pool, and in a public goods dilemma, conflict occurs over contributing to the maintenance of a shared benefit. Sometimes groups avoid, reduce, or accommodate conflict, but sometimes they exacerbate it. Individual differences in social value orientation matter a lot. Generosity creates higher payoffs, and it is especially likely when people have a choice, interact with their in-group, or feel efficacious.

When co-operation fails and conflicting interests endure, group members must negotiate over scare resources. Negotiation works well when it is binding and when people reach integrative solutions that go beyond a fixed pie. Accurate information about the preferences of others, as well as a prosocial orientation and high concern for others, all facilitate negotiations. Successful negotiators must also stand firm with their own concerns and resist rapid yielding to the influence of others. How do people influence others to conform?

Urban legends (modern myths) such as disgusting stories about blades and Halloween candy have never actually occurred. Nonetheless, these myths still continue to circulate. The more gruesome the myth is, the more famous it becomes. (Heath, et al. 2001) Rumour and gossip both reflect similar transmission of social information, important to group identity. They tend to be verbal, while social norms tend to be behavioural. Still, myths and gossip can control behaviour, as when parents forbid their children to go trick-of-treating during Halloween. Gossip, or the ‘common artifice by which signed chain communications are forwarded,’ enables the control of competing groups and individuals within a society (Brenneis 1984; Handelman 1973). Research on rumours and gossip (Allport, et al. 1946) noted that rumours surface under unclear circumstances when people seek meaning to understand emotionally important topics. Research has also shown that gossip is generated and spread when people are anxious, uncertain and involved (Rosnow, 1991). As gossip is spread, Allport put forward that they become levelled and sharpened. In other words, some parts of the rumour are eliminated and other parts are given emphasis. Anyone who has played the game of Chinese Whispers knows that distortions to the message occur at every stage of the verbal transmission.  Initial tellers of information make less extreme views than listeners who receive the information second hand. This also appears to occur when listeners do not pay careful attention, so they miss important mitigating information (Baron, et al. 1997).  When people first judge another person’s behaviour, without correcting for mitigating circumstances, they are more likely to make an extreme association to unpleasant qualities. Therefore, rumour and gossip are infamously known as being merciless with regard to other people’s reputations.

Conformity, the influence of the majority on individual behaviour, began with research of perceptual suggestion, group norms and group pressure. Although people show much independence, it was the degree of conformity that got many researchers interested. People do conform to the ingroup fairly automatically, to the extent that they indentify with a group, feel similar and even attachment to it. This occurs in all cultures, although more so in collectivist ones. When minorities do influence people, they do so by being persistent and consistent.

The social values that are present in individuals are products of informal social control. It is exercised by a society without explicitly stating these rules and is expressed through customs, norms, and more. Individuals are socialised whether consciously or subconsciously. During informal sanctions, ridicule can cause a straying towards norms. Through this form of socialisation, the person will internalise these norms. Traditional societies use mostly informal social control embedded in their customary cultures relying on the socialisation of the members to establish social order. More rigidly structured societies may place increased reliance on formal mechanisms.

An exception to the idea of values and norms as social order-keepers is deviant behaviour. Not everyone in a society abides by a set of personal values or the group's norms all the time. For this reason it is necessary for a society to have authority. In societies, those who hold positions of power and authority are among the upper class. Norms differ for each class because the members of each class were raised differently and hold different sets of values.  Formal social control is based on written rules or laws and prescribed punishments for violating these rules and laws (Almqvist, 2005). The police and courts are most directly charged with maintaining order under social controls. The means of formal social control are not very effective without direct support of the informal means of social control. The combination and the interaction of the two are central to establishing effective social control (Greene, 2006).