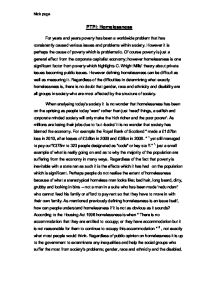 Homelessness. Of course poverty is just a general effect from the corporate capitalist economy; however homelessness is one significant factor from poverty which highlights C. Wright Mills theory about private issues becoming public issues. Howev

PTPI: Homelessness For years and years poverty has been a worldwide problem that has consistently caused various issues and problems within society. However it is perhaps the cause of poverty which is problematic. Of course poverty is just a general effect from the corporate capitalist economy; however homelessness is one significant factor from poverty which highlights C. Wright Mills' theory about private issues becoming public issues. However defining homelessness can be difficult as well as measuring it. Regardless of the difficulties in determining what exactly homelessness is, there is no doubt that gender, race and ethnicity and disability are all groups in society who are most affected by the structure of society. When analysing today's society it is no wonder that homelessness has been on the uprising as people today 'want' rather than just 'need' things, a selfish and corporate minded society will only make the 'rich richer and the poor poorer'. As millions are losing their jobs due to 'cut-backs' it is no wonder that society has blamed the economy. For example the Royal Bank of Scotland "made a �1.67bn loss in 2010, after losses of �3.6bn in 2009 and �35bn in 2008." 1 yet still managed to pay out"�375m to 323 people designated as "code" or key staff." ...read more.

Perhaps one of the first examples of gender inequality reducing was when New Zealand gave women the vote in 1893 as prior to this no country in the world would allow women such a right. However almost a decade on and women in certain countries were just getting that right now; in 2001 Bahrain gave women the vote. This alone outlines that there are still multiple inequalities for men and women in society. It can be said that many inequalities women face are due to the historical stereotype that women stay home to take care of the house and family whilst the men work all day and expect to be fed when they arrive home. It is undeniable that for years this was the case but it was in effect when the economy was okay, when women did not need to get a job and that single parents were generally quite rare, nevertheless in today's society the role of the family has changed and women have gained more rights and there is much more awareness about the gender inequality gap. However even countries like England still show signs of the gender gap being a significant problem in society. For example if we look at education it is clear to see that girls perform better at GSCEs, and have been doing so for over twenty years, "Some 26.5 ...read more.

There are clearly still ways in which people are discriminated but it is the serious effects of these problems which can have adverse effects on their lives, their family and their home. In today's society people are already limited to work and choices in general, we live in a society where people believe you need to work two jobs and work twice as hard to be able to maintain a good and healthy life but how it is possible when you face discrimination at work or in life. Homelessness is a resulting factor with a lot of inequalities talked about already, the fact that one person's race and ethnicity can determine how the rest of their life will generally be like just shows the extent of how discrimination to anyone can lead to such a thing as homelessness. Not only is it about the road to homelessness and the troubles faced but it is also about being able to climb above and get out of poverty, where the Government need to give advice and support. Although there is no doubt that the Government have passed legislations to help and counter these issues, there is clearly more that needs to be done, better funding for councils, getting to poverty before it causes homelessness and more importantly giving every child an equal opportunity regardless of sex, race or disability. ...read more.