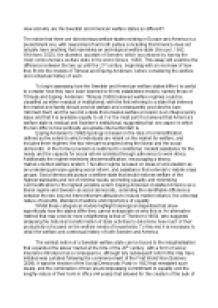 How and why are the Swedish and American welfare states so different?

﻿How and why are the Swedish and American welfare states so different? The notion that there are dichotomous welfare states existing in Europe and America is a predominant one, with researchers from both parties concluding that America does not actually have anything that resembles an archetypical welfare state (Skocpol, 1992; Wickham, 2002), the diametric opposite of Sweden, which is portrayed by having the most comprehensive welfare state in the world (Greve, 1983). This essay will examine the difference between the two up until the 21st century, beginning with an overview of how they fit into the models of Titmuss and Esping-Andersen, before considering the welfare and contextual history of each. To begin assessing how the Swedish and American welfare states differ it is useful to consider how they have been deemed to fit into established models, namely those of Titmuss and Esping- Andersen. Titmuss (1958) believed welfare regimes could be classified as either residual or institutional, with the first referring to a state that believes the market and family should provide welfare and consequently provides the bare minimum itself, and the second a state that ensures welfare provision is an integral policy issue and that it is available equally to all. For the most part it is believed that America?s welfare state is residual and Sweden?s institutional, suggesting that one aspect in which the two differ is how politically acceptable interventionism is. Esping-Andersen?s (1990) typology is based on the idea of commodification, defined as the extent to which individuals are reliant on the market for welfare, and includes three regimes; the two relevant examples being the liberal and the social democratic. ...read more.

The economy recovered at relatively fast pace (roughly 4% per annum) and with this welfare once again expanded, most notably in education, childcare and care for the elderly (Hort, 2009). Accepting that this is indeed an ideal welfare state (or as close as it may be realistically possibly to achieve) it is therefore necessary to consider the development of American welfare, both to reflect if the latter can be defined as such and also to identify why the two are different. In America the first recognisable endeavour to create something akin to a welfare state was the introduction of the New Deal initiatives between 1933-6 under the presidency of Democrat FD Roosevelt, an attempt to combat the economic depression the nation was experiencing (Noble, 1997). Amongst its socialist creations was the Works Progress Administration, which employed millions of unskilled labourers on public infrastructure projects, the Social Security Act 1935 that provided financial assistance for the elderly, unemployed, widows and the disabled and the United States Housing Authority that attempted to eradicate slums by building houses reserved for those that lived in them (Clarke, 2009). Although the New Deal represents a positive impact on the disadvantaged it can be argued that it further entrenched segregations already apparent in American society, with any support for women largely derived from their marital status and black people excluded from programmes such as Social Security as a matter of policy (Noble, 1997). The next key advance in welfare development is the Great Society reforms of the 1960s and 70s that changed the nature of welfare provision, substituting payments in cash with services in-kind wherever possible. ...read more.

Such developments suggest that whilst America does have welfare, it does not have a welfare state, possibly the most fundamental way it differs from Sweden. In conclusion two key reasons can be derived from the welfare history as to why America and Sweden differ; the first is organized labour movements. The consensus between trade unions, employers and the state is defining in Sweden?s history for creating a platform for both of the former to influence related policy, and the lack of success of trade unions in America has not allowed for such. This could be considered a consequence of a deeper cultural ethos, as the America commitment to individualism may not foster the will to create a public good such as a trade union (Friedman, 2010). The final reason as to why the countries may differ is the nature of citizenship, the status granted to those who are full members of a society (Marshall, 1964). In Sweden citizenship is consistent, the rights of such are available to all and the relationship between the citizen and the state is clearly defined. America on the other hand appears to have more flexible citizenship, derived from its historical segregation and commitment to capitalism, which allows people to be stratified into first and second-class citizens to whom welfare has a different entitlement. Overall it appears that the Swedish and American welfare states are dichotomous in every way that matter; from universality to selectivity and equality to stratification. ...read more.