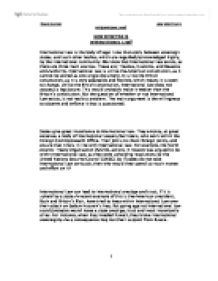 How effective is international law?

Mutually Assured Destruction (MAD) may actually be making conflict less likely. But this could be proven wrong, if the US and the majority of the United Nations do decide to attack Iraq. Domestic Laws are the laws that are based in the states themselves. This usually seen as a good comparison for success. But not all of the domestic laws receive total compliance. For instance, speed limits are very often broken. Even though this does happen, domestic law is not discounted. So why should it be done with International Law? Some political commentators suggest that the pluralistic enforcement, methods used in pre-industrial societies can achieve success. It means that individuals could call upon others to achieve revenge, retribution etc. So basically 'collective security'. Also International Law has the benefits of the British constitution. So it is possible to adapt and change to suit modern conditions. So the global south (third world) views can be adopted into it. It can meet the ever-changing conditions in the international system. For example the 'War on Terrorism'. There are no enforcement mechanisms, this leads to a number of problems. As it is down to the states to enforce. Also other states will only get involved to help another state uphold International Law if it is within their own interest. Another point, is that if a powerful state is the aggressor in a situation, then who is going to confront them? ...read more.

The resources that were available for this case were ones of high quality. For instance, Britain and France gave money, the Dutch gave the Hague Security, NATO forces made the arrests and the best lawyers were willing to work on this case. But this has not always been the case. For instance, the tribunal in Rwanda. It was set-up for the murders of hundreds of thousands of people killed in Rwanda in 1994. It was based in Tanzania. Tanzania is based in the global south (a third world country). Therefore the resources that were available were atrocious. There was a lack of hotels for the lawyers and judges etc to stay in. The conference centres were not up to standard. They were behind schedule most of the time. So basically the whole thing was a farce. It seems as though International Law is only used and enforced when it suits the powerful, when they know they can win at little cost. But it is also effective. For instance the ECJ is a well-respected organisation, and has resolved issues. War Tribunal has brought the evil Milosovic to justice, and even though there are still some war criminals at large, they are indictment, which means that they on the run for the rest of life. So yes, International Law is not very effective in terms of the ICJ, but it has been successful in other areas. DAVID JACOBS HOW EFFECTIVE IS INTERNATIONAL LAW? 1 ...read more.